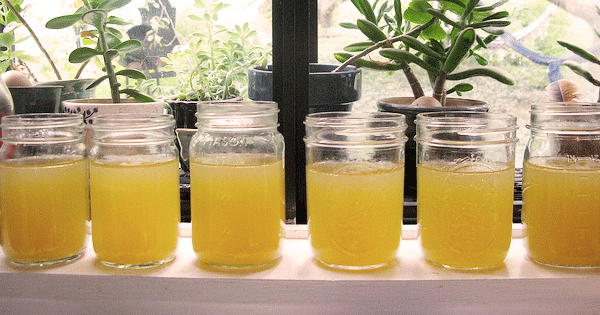 What Is Bone Broth, And Why Is Everyone Drinking It?

The trend is getting so popular that Marco Canora, a chef from New York City, opened a "cafe" of sorts called Brodo back in November. Their specialty? Brodo serves grass-fed bone broth in coffee cups. Click here to find out what bone broth is all about!

The trend is getting so popular that Marco Canora, a chef from New York City, opened a "cafe" of sorts called Brodo back in November. Their specialty? Brodo serves grass-fed bone broth in coffee cups.

It's fairly simple. The broth is made by boiling animal bones, then adding things like ginger, apple cider vinegar and herbs. Many drink this broth as they would tea--but don't worry, it's nothing like sipping on a cup of chicken broth. Thanks to the added ingredients, it has a much more complex taste than that.

You can make it at home in either a soup pot or slow cooker by throwing together animal bones and water, then letting it boil for four to 48 hours. Personal chef and nutritionist told Ariane Resnick told Refinery 29 that "when the bones are boiled long enough, they start to disintegrate and release nutrients and proteins -- like calcium phosphate and collagen -- in higher quantities than what's found in regular broths."

Dawn Jackson Blatner, a registered dietician and author of The Flexitarian Diet, acknowledges that bone broth has many benefits, but explains that she wouldn't call it the next superfood. "It's not a miracle cure like some outlets talk about, but still a good-for-you food," she told The Huffington Post. "It is hydrating, contains veggie and herb anti-inflammatories and the bones provide collagen, a protein which may help with our own bone, joint and skin health."

Nutritionist and New York University adjunct professor Dr. Lisa Young agrees with Blatner, saying that the benefits are undeniable but she's not sure bone broth has "as much staying power as other health trends such as kale."

"The advantage of kale is that you can have it in so many ways -- a salad, sauteed, as a drink," she explained to the Huffington Post. "Bone broth is also not an exciting name. Nonetheless, it is a trend right now. It's certainly good as a soup for winter in cold climates."

What do you think about bone broth? Have you had it before? Let us know where you stand!