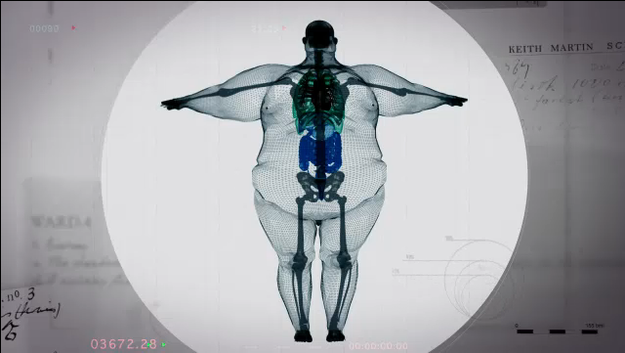 This is what a 980-pound man looks like on the inside. Check it out!

Briton Keith Martin had reached 980 pounds, and hadn’t been able to stand in over two years. A supposed x-ray of Briton began making the rounds on the Internet last year after trending on Twitter, claiming, “This is what a 980-pound man looks like on the inside.” The picture itself is not an actual x-ray, but a computer-generated image of what Martin likely looked like on the inside. His emaciated, overburdened skeleton and organs were dwarfed by his body fat and excess skin, and without intervention, his stressed skeleton and strained organs were likely to get worse or possibly even fail, thus making losing weight even more unlikely.

Bedridden, plagued with health issues, and told by doctors that he would die in within two years if he did not work on his health, Martin reached out for help to a British reality show, “70 Stone and Almost Dead.” Whereas a healthy adult male should have a Body Mass Index of about 18-25, doctors discovered Martin had a BMI of 155, more than 10 times the normal BMI for even an obese individual. With the help of an exercise regimen and a strict diet, Martin was able to lose 25 stone, or 350 pounds. After losing the weight, Martin was able to stand for the first time in years, and was given the approval to have weight-loss surgery.

What are your thoughts? Comment and let us know!