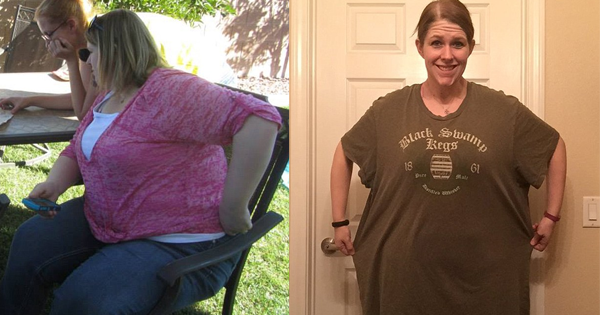 She Gains So Much Weight That She Can Only Wear Her Husband's Clothes. That's When She Realizes Something Is Wrong.

She got comfortable, but then she realized that being this heavy wasn't comfortable at all. So she made a change...

A waitress in Las Vegas, she let herself go after giving birth to her son, Caleb.

She was comfortable in her motherhood and language, but that turned out to be detrimental.

She began to lean into her weight. “I used to say, ‘I’m not fat, I’m fluffy,’” and Bryan would laugh,” Melissa said of her husband. “He loves me unconditionally though, whether I’m big or small.”

However, she realized she had to change when she began to wear her husband’s clothes.

“It was so humiliating,” she said. “I was so fat I could only wear his clothes.

“I would wear my husband Bryan’s T-shirts and sweatshirts because they would fit and feel more comfortable. I’d be hiding under them. I didn’t like anything clinging to me or that would accentuate my rolls.

“But when he saw me getting dressed he’d say, ‘I was going to wear that today.’”

Deciding to make a change, she joined Weight Watchers and began to use its food point system.

She also started running, and put 2 5k runs into her routine every week.

Now, she’s down to a little over 160 pounds, and her goal is to lose even more.

She’s thrilled that she’s been able to get the figure she’s always wanted, and that she can play with her son.

“Caleb loves that mamma can play more and jump around with him without getting winded,” said Melissa. She also credits her husband for his help.

“Bryan does all my cooking for me, measuring everything out. Without him, I wouldn’t have been so successful.”

“Family and friends tell me how great I look, I smile much more, and even my eyes are more open. I’m going to keep going. I probably have about 16 more pounds to go to reach my ideal weight.”