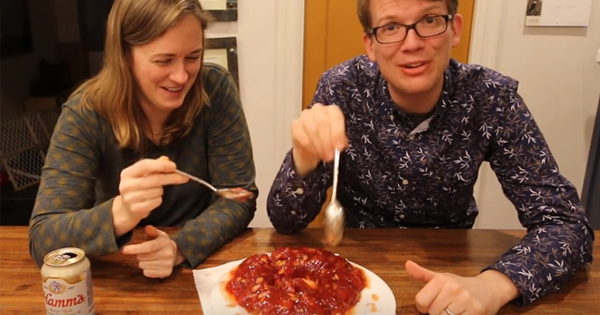 They Bravely Try Recipes From The '50s. The Results? Disgusting With A Side Of Hilarious!

Watch this hilarious video of a modern couple trying recipes their grandparents used to eat back in the 1950's!

Have you even wondered what people ate back in the day when sock hops were a thing? Well let’s just say, after watching this video, I’m surprised they had taste buds back then.

For Christmas, Katherine received a book that contained recipes her grandmother had pasted in from newspapers and magazines in the 1940’s and 1950’s.

The recipes were “interesting,” so Katherine and her friend decided to test some of them out for themselves.

The first recipe they bravely tried out? “Golden Rabbit,” which is not, in fact, rabbit. As the recipe cut-out proclaims, “YOU MAKE IT WITH TWO CAMPBELL’S SOUPS.”

Really what it ends up being is two soups mixed together served over crackers.

Classy. Also, not very tasty. According to the couple, “the predominant flavor is crackers.”

“This is not on the list of things I want to eat again,” Katherine tells the camera.

The second recipe they try out is for “popovers,” which is basically just bread. The consensus for the popovers is relatively positive, although they may have liked them even better if Katherine’s friend hadn’t burned them.

Perhaps the most intriguing recipe in the book is a combination of Mexican and Chinese food called, “Mexican Chop Suey.”

“It smells like dog food,” Katherine says laughing as she sniffs her dish. It also kind of looks like dog food…personally, it doesn’t look like something I would try.

Her friend takes a bite and can barely swallow it, then suggests adding “huge amounts” of salt to improve its flavor.

I think the creepiest dish they make has to be the “Orange Cranberry Relish Mold.” The result does look “like a colon.” Gross!

Click here to watch this fearless couple attempt to eat the food their grandparents used to chow down on (and bookmark, apparently):