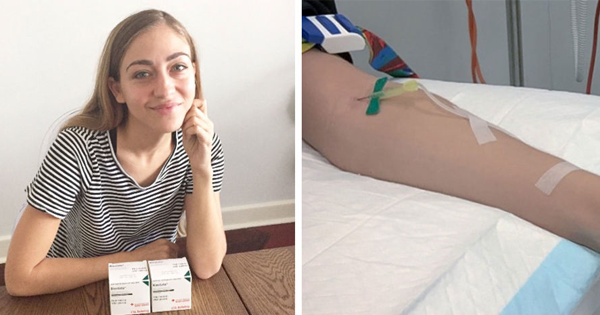 A young woman has opened up about the rare blood disorder that forced her to have a period for five years straight. Read on for more details!

A young woman in Australia has opened up about the horror she suffered through when she had her period for five years straight.

Chloe Christos was 14-years-old when she got her first period, but it would be five years before she finally got to say she’d stopped bleeding for a moment.

While speaking with ABC News, Christos, now 27, said she was often forced to make several trips to the ER for iron infusions to treat the severe anemia she’d developed over time.

"I knew it wasn't quite right, but I was also embarrassed to talk about it," she told ABC. "I felt very different and pretty alone."

Christos was 19 when doctors finally did blood tests that determined she had von Willebrand disease, a rare and lifelong blood disorder that prevents blood from clotting properly.

Because there was no real cure for the disorder at the time, doctors essentially told Christos that her only real option would be to have a hysterectomy.

While a hysterectomy would stop Christos’ period altogether, it also meant that at just 19-years-old, she would never be able to have children of her own.

"I don't know if I ever want kids but I never wanted to get rid of what made me a woman," she said. "And I was terrified of being in my mid-20s and going through menopause."

For a long time, doctors struggled with treatments for Christos’ rare condition.

"I came across a lot of people, even in the medical profession, who didn't realize what it meant for women to suffer from a bleeding disorder," she told ABC.

Christos has tried a slew of different treatments over the years, but she’s only recently found one that’s finally helped her experience her very first four- or five-day period ever.

"That happened for the first time less than a month ago," she said. "I truly feel so lucky that I have found something that works for me."

Christos is now telling her story to raise awareness about blood disorders like von Willebrand disease and to urge women, especially, to come forward if they’re experiencing any kind of uncontrollable bleeding.

"A lot of statistics and data is kept on diagnosis and treatment for men," she told ABC. "There's almost nothing on women that doctors can refer to, and I hope we can change that."