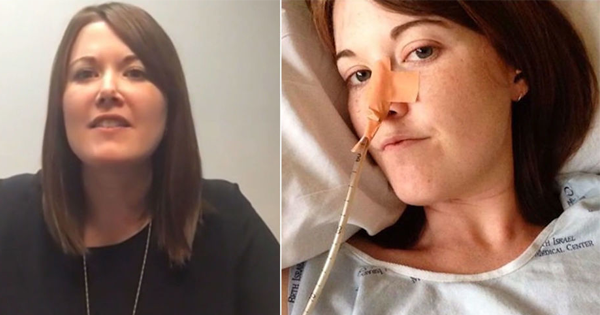 Nearly two years after a young woman began experiencing severe stomach pains, doctors discovered she had an extremely rare tumor. Read on for the full story!

When Johanna Dickinson first experienced a bout of extreme stomach pain, she chalked it up to bad sushi before a party.

“Is this what childbirth is like?” she wondered when the excruciating stabbing pains began riddling her stomach, Dickson told the Washington Post.

It would be six months before the unbelievable pain returned, which Dickinson understandably assumed couldn’t be related to the first.

Finally, when the third struck a year later in 2008, then 24-year-old Dickinson knew it was time to get a CT scan done.

Between 7 a.m. and noon on the day she went in for the scan, Dickinson had already lost five pounds.

Doctors at the New Jersey hospital decided then and there that Dickinson desperately needed emergency surgery to fix a bowel obstruction.

"I remember hearing something about my intestine being really badly tangled and that it was something you [usually] see in people over 60," Dickson told the Washington Post of what she remembers hearing during her pre-surgery morphine daze.

Bowel obstructions are typically caused by hernias, scar tissue from a previous surgery, or Crohn’s disease.

In Dickinson’s case, however, what ended up causing the obstruction is something so rare that it’s only found in 900 Americans each year.

As it turns out, Dickinson’s intestines had completely wrapped themselves around a plum-sized desmoid tumor, causing her excruciating pain over the course of nearly two years.

Because the tumor had been attached to Dickinson’s abdominal wall, doctors diagnosed her with mesenteric fibromatosis.

It wasn’t until later that Dickinson, thankfully, discovered that the tumor was benign, or non-cancerous.

Although Dickinson still visits an oncologist to make sure that the tumor hasn’t returned, she hasn’t had any reoccurrences since the surgery.