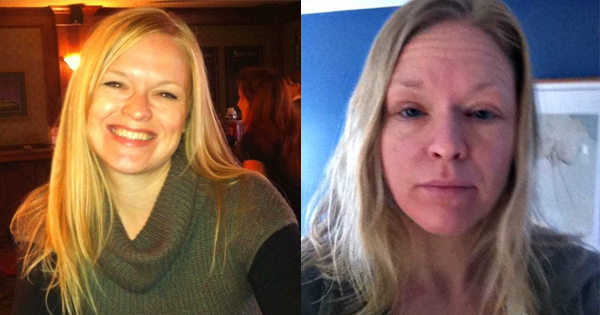 People all over the world are claiming that Neutrogena’s Oil-Free Acne Wash Pink Grapefruit Facial Cleanser is giving them chemical burns.

38-year-old Lori Elizabeth Ens told BuzzFeed News that her skin has never been particularly sensitive to any products.

It wasn’t until she spent the night at her sister-in-law’s house and used her Neutrogena Pink Grapefruit Cleanser before bed that Ens realized something was not right with her skin.

Despite sleeping for 11 hours after washing her face, Ens woke up feeling tired and groggy and in terrible pain.

“Not until the following day, I woke up in middle of night and my whole face was swollen and my eyes were swollen shut,” she said. “I couldn’t recognize my face in the mirror.”

While her doctor prescribed prednisone, typically used to treat allergic reactions, to calm the swelling and eye drops to clear the irritation, Ens couldn’t figure out what had caused her to break out into such a painful reaction.

Once she narrowed the possibilities down to the Neutrogena cleaner, she searched online, where she found tons of people who experienced the same exact problems that she did.

Several women said the Grapefruit Facial Cleanser was the only Neutrogena product to cause what many described as “chemical burns.”

Most of the people who experienced negative reactions to the grapefruit-infused cleanser claimed their face seemed red, swollen, itchy, burning, and many said their skin was so dry that simply talking would cause painful cracks all over their face.

“My face was swollen,” one person wrote on Neutrogena’s site. “I couldn’t sleep from pain. I couldn’t stand to eat or open my mouth because the dried skin would rip apart.”

“All of our products are safe and effective when used as directed,” the company said in response to the complaints. “Skin irritation and dryness is more likely to occur if you use another topical acne medication at the same time.”

Dr. Jonathan Silverberg, an associate professor of dermatology at Northwestern University’s Feinberg School of Medicine, told BuzzFeed News that it’s tough to pinpoint exactly which ingredients in this particular cleanser have caused so many people to experience negative reactions.

However, Dr. Silverberg did note that some of the botanical extracts in the product, like chamomile and grapefruit, are common skin irritants, especially when applied directly to the face.

BuzzFeed News also spoke to Dr. Tyler Hollmig, a dermatologist and director of the Laser and Aesthetic Dermatology at Stanford Health Care, who said that grapefruit contains alpha-hydroxy acids, which can exfoliate the skin.

However, when combined with salicylic acid, grapefruit extract may “work synergistically to induce skin peeling or exfoliation, which could theoretically cause an increased risk of skin irritation.”