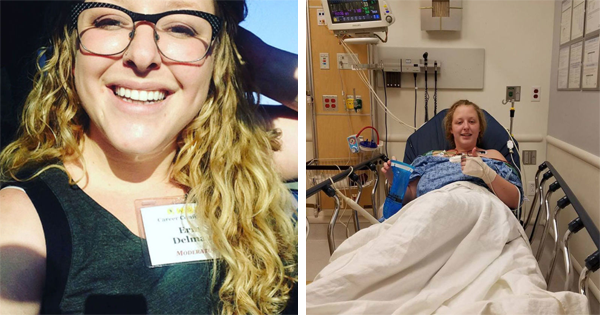 She Can't Stop Vomiting, But Her Doctors Can't Figure Out What's Wrong...

The episodes started happening when Erin Delman was an undergrad in college. She would wake up every morning and vomit for hours. It wasn’t until she was a fourth year student in grad school that she finally received a diagnosis for her condition.

It began in 2008. Erin Delman would wake up every morning at 2 am to vomit, multiple times, often for the next 16 hours. She thought it was simply because she’d been drinking too much, that this was her extreme, exaggerated version of a hangover that her peers could overcome with food, coffee, and Advil.

Delman’s condition stayed the same through her undergrad years, but when she started grad school, everything only got worse. She began to throw up multiple times, every day, for several months.

She kept trying to explain her strange symptoms away by attributing them to food poisoning, extreme sensitivity to food. Both Delman’s parents were doctors, so she assumed they would have been able to diagnose her already.

But it was to no avail.

Delman’s parents sought out the advice and expertise of many doctors around the state. None of them could precisely determine what was causing Delman’s episodes.

It wasn’t until Delman’s twin brother sent her a link on cyclic vomiting syndrome that Delman finally had a lead.

The entire Delman family worked together to then find a cyclic vomiting expert in Texas. Delman was finally able to be diagnosed there.

Cyclic vomiting syndrome is a medical disorder that occurs in unique episodes for each patient. For Delman, she would wake up at 2 am and vomit for hours. Even when she had already emptied her entire stomach, her body would continue retching, so Delman was forced to drink Gatorade – only to throw it back up. The episode would only end after Delman took medication.

At her diagnosis appointment, Delman was told that her condition was debilitating – but not untreatable.

The news made her want to cry. Hearing from the physician that “this is a neurologic condition with these treatment options” allowed Delman to finally feel a sense of relief. She knew that there was an end in sight, even if the journey would be long and difficult.

Delman is now under the constant watch and care of her parents, as well as her boyfriend. She’s still suffering from episodes of cyclic vomiting, but after consulting the expert in Texas, she now has a better idea of how to manage her health, diet, and medication to avoid as many episodes as possible.

Despite everything she’s gone through, Delman maintains an incredibly positive attitude: “You have to laugh about it when you’re feeling good, ‘cause otherwise it’s impossible to just live.”