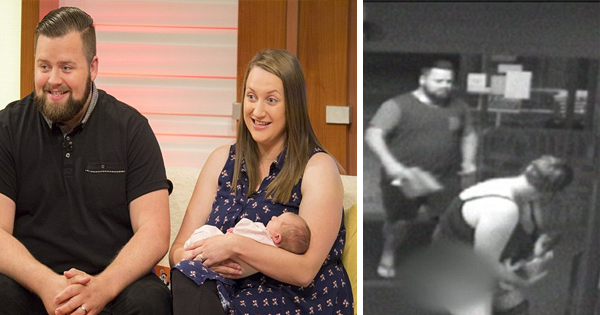 Expectant mother, Jessica Stubbins, knew that her baby was on the way, but she never expected that her daughter would arrive before she even had a chance to sit down and prepare. Watch the entire birth happen in this hospital security footage.

It was just after midnight when Jessica Stubbins realized that she was going to give birth that night, despite what the doctors had told her earlier that day at the hospital.

Her husband, Tom, quickly drove her to the hospital where Jessica just told him to “drop [her] off at the door as he parked his car.”

As she quickly closed the door of the car, however, Jessica recalled, “I just knew that [my daughter] was on the way.”

Jessica’s premonition was right. Not long after she entered the hospital doors, she felt a twinge between her legs and knew – her daughter was coming at that moment and wouldn’t wait for another second.

There wasn’t even time for Jessica to find a place to sit down. “There was no stopping her,” Jessica explained.

A nurse in the hospital, Gemma Hoeft, remembered seeing Jessica enter the hospital and thinking, “That girl’s not going to make it. But by the time I made it Jessica was still stooped over but when I looked she had little Lucy in her arms.”

Tom rushed to join his wife as soon as he could, but by that point, Jessica was already exclaiming, “It’s a girl, it’s a girl! I’m sorry, I’m sorry!” She was apologizing that he’d completely missed the entire moment.

He was entirely good-natured about the entire incident: “It was only about a hundred feet away and I still missed it.”

Mother and daughter, Lucy, are both safe and healthy, and have since reunited with Jessica’s first daughter, Penny, as one happy family.