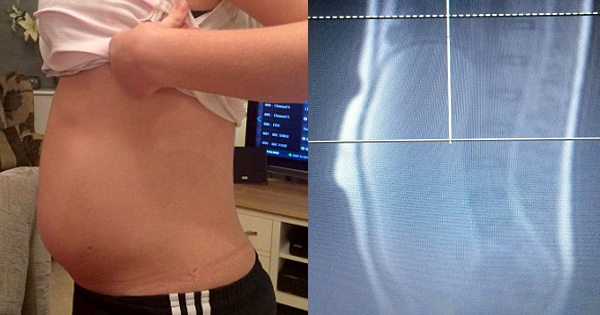 Doctors assumed that a teen's painfully bloated belly was the result of an unplanned pregnancy, until they took a look at her scans. Keep reading for the full story!

When Olivia Key first visited her doctor with a painfully bloated belly, she was immediately told that she had to be pregnant.

Unable to deal with the excruciating pain any longer, Olivia, now 18, had to be rushed to the hospital, where doctors could figure out what was wrong with the “baby.”

As it turns out, Olivia wasn’t pregnant at all—she had a tumor in her left ovary, surrounded by a massive cyst.

While the tumor itself was not all that big, the cyst was almost unimaginable.

When doctors took a look at her scans, they were floored to find that Olivia’s ovarian cyst had grown to the size of a watermelon.

“The cyst was so huge I thought it was going to pop like a balloon at any moment - and I feared the cancer would spread throughout my body,” the teen recalled.

Fortunately, after removing both the tumor and the 30-cm cyst, doctors told Olivia that the cancer had not spread.

“Luckily, surgeons got rid of it and the cancer hadn't spread any further,” Olivia said. “It never crossed my mind that you could get cancer at such a young age, you don't think it's ever going to happen to you.”

Just a few weeks after the life-changing surgery, Olivia was already back in action, doing sports and going on long hikes with all her friends.

Dr. Richard Hutson, the gynecological oncologist who performed Olivia’s emergency surgery, soon had even more incredible news for the teen.

Although doctors had to remove a tumor and a huge cyst from her ovary, Olivia’s fertility was in no way affected by the surgery.

“Additionally, as there has been no damage to her fertility, she will be in the same boat as anyone else of her age if she wants children in the future,” Hutson said.