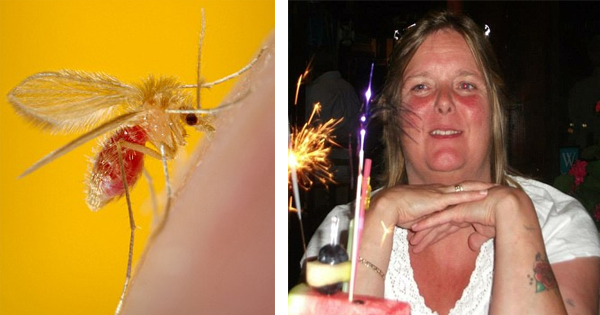 She Gets Infected By A Parasite, But Doesn't Find Out Until Nine Years Later

Last fall, Corinne Little-Williams noticed her voice getting progressively huskier and huskier. She put it down to a cold – but then she began choking every time she tried to eat solid food.

In the fall of 2015, Corinne Little-Williams discovered that her voice was becoming deeper and huskier. When she swallowed, her throat felt dry and slightly sore, so she put it off as a cold. But then she lost her voice. She could barely even utter a sound.

Although the symptoms prevailed, Corinne chose not to go to the doctor. She just thought she was going through a particularly bad cold.

Come Christmas, however, Corinne began to lose the ability to eat solid food. Anything she ate just made her choke; she struggled to breathe and couldn’t swallow. When she was sleeping, she wound up waking herself up because the struggle to breathe had been so severe.

That was when Corinne finally went to the doctor, who inspected her throat with a camera.

Her voice box was “misshapen,” and the doctor feared it might be cancer – particularly since Corinne’s family had a history of the disease.

Corinne waited anxiously for the biopsy results to come out.

She was, thankfully, cancer-free.

But the test results revealed another problem: Corinne’s throat was coated with parasites. These tiny bugs, called mucocutaneous leishmaniasis, had latched themselves onto her vocal cords.

The doctor couldn’t quite understand how or when Corinne had contracted this infection. These cases typically begin with an ulcer or a sore developing, after being bitten by a sandfly, but Corinne could barely recollect the last time she’d been bitten by a mosquito.

After a long period of thought, Corinne finally realized: Nine years ago, back in 2007, she’d been attacked particularly severely by mosquitoes when she went to Greece for a family vacation.

The doctor was stunned that the disease had remained dormant for so long. Generally, these infections can cause death in a matter of months, and after nine years of infection, Corinne hadn’t had long to live before she went to see a doctor.

Thankfully, after about four months of treatment, Corinne has made remarkable improvement. Her voice is almost completely back to normal, and everything else about her body – her breathing, coughing – is also returning to its usual state.

Corinne admits, “The whole experience — from the choking to the sickness from the medicine — has been horrific, and I've made up my mind never to go abroad again.”