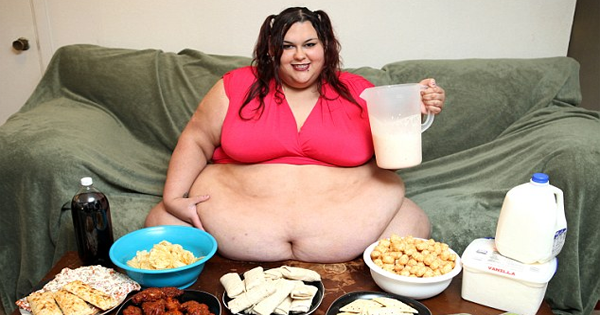 27-year-old Monica Riley dreams of weighing exactly one thousand pounds and becoming the world’s heaviest woman. Her boyfriend, Sid, is ready to feed her until she gets there.

Monica Riley, a 27-year-old woman from Fort Worth, Texas, has set her sights on becoming the world’s heaviest woman. At 700 pounds, she still has a shocking 300 pounds to gain before she gets there.

She currently makes money by being a model on Super Sized Big Beautiful Woman websites, where men pay money to watch her eat.

25-year-old Sid Riley (whose surname was taken by Monica despite their not being married) has taken it upon himself to help Monica get there. For him, he sees his role as a feeder boyfriend as his caring about Monica and wanting to help her achieve her goals.

Every day, he spends his time cooking her grotesque meals and ensuring she consumes at least 8,000 calories a day. 3,500 of these calories are in the form of a milkshake made from double cream, consumed through a funnel positioned above Monica’s mouth.

Monica’s ultimate goal, hopefully achieved by the time she weighs 1,000 pounds, is to “become immobile.” She explains why, “I would feel like a queen because Sid would be waiting on me hand and foot and he’s excited about it too.”

These are not, unfortunately, the last of the couple’s plans together.

Monica and Sid are also trying to have a child together, despite the controversy surrounding this decision. “There’s nothing to stop me from raising a child from my bedroom,” Monica claimed. “Some people might think it’s selfish but I’m confident we would be good parents.”

Watch the feature on Sid and Monica here: