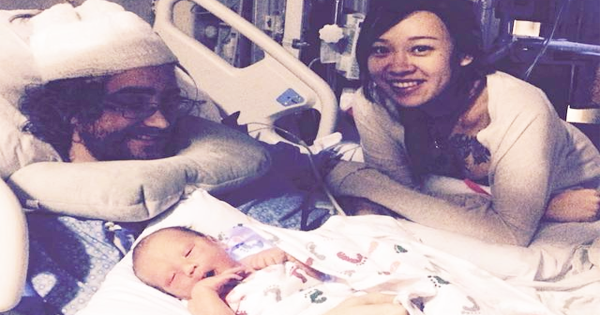 Three Weeks Before His Baby's Due Date, He Went To His Doctor Because He Kept Getting Headaches. He Thought It Was Something Minor, But It Wasn't

When Cagney Wenk gets diagnosed with terminal brain cancer just three weeks before his son is born, his doctors and nurses immediately make plans to make the birth as memorable as possible.

Cagney Wenk and Jessica Li prepared many things before their son’s birth, but nothing would have ever made them think to prepare for this.

Just three weeks before Li’s due date, Wenk went to see his doctor about some headaches he’d been having for a couple days. He thought it was something minor, but the diagnosis was far more serious than anyone could have anticipated.

Wenk was diagnosed with Stage 4 glioblastoma, a serious brain cancer that can’t be treated.

His doctors can many scans and quickly scheduled several surgeries to remove as much of the tumor as possible, but the results weren’t very conclusive. Wenk’s condition is still unstable and doctors aren’t sure how long he has to live.

In the meantime, Li was continuing to prepare for their son’s birth. When her nurses realized Wenk’s condition, they decided that they would do everything they could to move Wenk’s ICU bed and machines into Li’s delivery room. They wanted to make the birth as special as possible for the couple.

The nurses reached out to Now I Lay Me Down to Sleep, an organization dedicated to creating remembrance photos for parents who have lost their children, and asked if photographer Sarah Boccolucci could photograph and film the birth.

On the day of, all the nurses’ plans proceeded smoothly.

Wenk in his ICU bed and all his equipment were moved into Li’s delivery room, Boccolucci was able to document every moment of the birth, and Li’s birth experience went without a hitch. The couple’s son, Levon, was born “surrounded by all the love in the world.”

After the birth, the nurses even made sure to turn Wenk and Li’s beds together so the new parents could both bond with their son.

Boccolucci has since released her photos and film online, hoping that “people will see the video, feel the love this family shares and help lift them up and make a donation, if they are able.”

If you can support Cagney Wenk, Jessica Li, and their newborn son, Levon, please do so by donating to their GiveForward page.