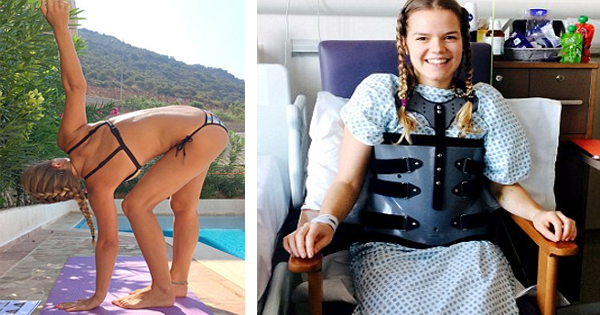 Doctors Are Amazed When She Walks Just 11 Days After Getting Hit By A Car Thanks To Her Hyper-Flexible Spine.

Laura Wellington got hit by a car when she’d merely been crossing the road. Given the extent of her injuries – broken vertebra, fractured skull, injured shoulder – doctors thought she would never walk again. She amazed everyone, including herself, when she took her first steps just 11 days later.

In February 2015, when Laura Wellington was just 22 years old, she was hit by a drunk driver as she was crossing a street in London. An ambulance was called to rush her to the hospital, where doctors diagnosed her with a broken T-11 vertebra, a fractured skull, as well as an injured shoulder.

Although doctors were able to give her this preliminary diagnosis, they warned Wellington to remain still as much as possible during the first three days after her injury so they could determine the extent of her injuries, as well as how to best treat them.

They warned her at the time that there was a high chance she would never be able to walk again, because of her broken spine.

For nine days, Wellington laid on her back as doctors diagnosed her. She was given the option to undergo surgery to repair her spine, or simply wear a brace to let it heal on its own.

Wellington ultimately opted for bracing. When she was a teen, she’d been told that her spine was hypermobile; her joints could bend and extend further than those of an average person. She didn’t want to further injure her spine and compromise its stability.

Two days later, a grand total of 11 days after her accident, Wellington was able to get up from her bed and take her first steps. Everyone was amazed.

“After the crash the neurosurgeon told me it was a miracle that I wasn't paralyzed as my back was in a complete mess,” Wellington explained. “He told me that being hypermobile prevented me from paralysis, instead of my body snapping my joints and ligaments stretched instead.”

In spite of Wellington’s positive initial diagnosis, she still had to spend about three months at home to make a full recovery. Her parents helped her shower and fitted her room with a baby monitor in case she woke up during the night and needed something, but was unable to get it herself.

Now, almost two years after her accident, Wellington has made a full recovery. She has returned to being fully independent and now takes yoga classes to strengthen her spine, but maintain its flexibility.

Returning to the city of London has been difficult for Wellington, but she knows “how lucky [she] was to have survived,” and has since made that emotional journey to overcome her fears.