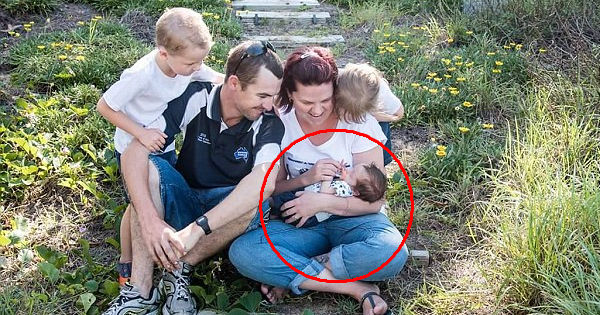 She Thinks She Just Has A Minor Cold, But Then Her Doctor Tells Her It's A Virus That's Made Her Unborn Child Deaf

When she was pregnant with her third child, Rebekka Murray thought she would be able to anticipate much of what pregnancy would have in store for her. 20 weeks later, however, her doctor was forced to give her bad news…

24-year-old mother-of-two Rebekka Murray was thrilled to be pregnant with her third child with her husband, Reid. The two already had two children, four-year-old Callum and three-year-old Ella, and were eagerly anticipating the birth of their third.

At Rebekka’s 20-week ultrasound, however, her doctor frowned and then asked her an unexpected question: “Have you been sick?”

As it turns out, Rebekka had gotten ill sometime between the first and second trimester of her pregnancy. But in her assessment, it had simply been a “bad cold.”

The doctor had no choice but to break the sad truth.

Rebekka had actually contracted a virus, cytomegalovirus (CMV), a common virus passed through bodily fluids, but doesn’t always cause noticeable symptoms in its victims. If a person with a strong, healthy immune system contracts this virus, it will simply live in their body, but will not cause any sickness to manifest.

Because the first time Rebekka became infected with this virus was during her pregnancy with her third child, Jackson, her body wasn’t able to fully control and restrain the virus.

At her 34-week appointment, Rebekka’s doctor was able to determine that yes, Jackson had contracted the virus through his mother.

The blood vessels in his brain were dilating, and his liver and spleen were both too large for his size. “He stopped growing at about 30 weeks,” Rebekka explained. “He was becoming anemic.”

After 35 weeks of pregnancy, Jackson was born – and immediately rushed to the special care unit, where he stayed for a full month, undergoing platelet transfusion and warding off a second infection, on top of the CMV, which had caused him to be born deaf.

At present, Jackson has been deemed healthy enough to return home with his family, and his parents are grateful that he is, aside from his inability to hear, otherwise completely healthy.

“We need to be careful of a lot of things as he grows older, he could get epilepsy, cerebral palsy, calcification on the brain, but for now we're quite blessed,” Rebekka acknowledged.