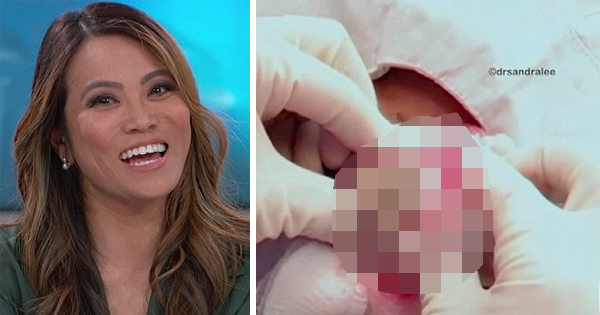 Dr. Sandra Lee – aka Dr. Pimple Popper – was recently invited onto a TV show to talk about her some of her favorite pimple extracting moments. The extraction she’s picked has over 6 million views online.

The infamous Dr. Sandra Lee – perhaps better known as “Dr. Pimple Popper” – was just interviewed on a TV show and asked what she considered her “greatest hits” of all the extraction videos she’s filmed and shared in the past.

Dr. Lee smiled and laughed as she provided some context for the video. “I call this a doorknob cyst,” she began. “This guy came in and he had this growing for quite a while. It was really firm and it came out like a hard-boiled egg consistency.”

The audience is visibly disturbed, and Dr. Lee continued her explanation, saying that the patient likely had had this growing for the past ten years, thinking it would take far more money and time to remove it than actually was the case.

In the clip they played during her interview, you don’t see the full extraction process, just the moment when Dr. Lee squeezes out vaguely beige-colored material from the lump – an epidermoid cyst that is filled with keratin (wet skin cells) that have the consistency of cottage cheese – on the man’s upper arm.

The full, original video on YouTube, however, also features Dr. Lee going through the process of cutting the cyst open, as well as her tugging out lingering bits of fat inside the man’s now-gaping arm.

Back on the show, Dr. Lee doesn’t look at all bothered while her audience members can barely keep their eyes on the video.

You can watch the full interview of her on The Doctors later this week, where she will also talk about another one of her favorites: the extraction of an eyelid cyst.

Watch the previous video here. Be warned; the contents of the video are graphic and may disturb some viewers.