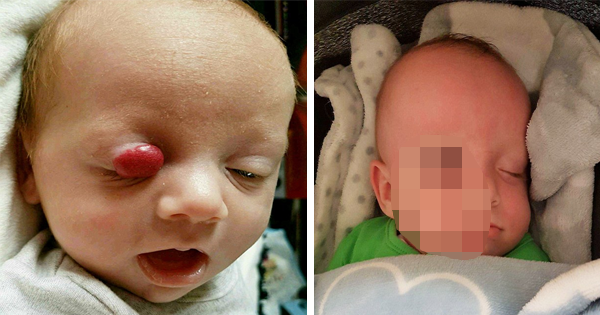 Doctors Refuse To Operate On This Baby's Swollen Eyelid. His Parents Rush Him 3,000 Miles Away To Doctors Who Can Perform The Life-Saving Operation.

Oliver Francis was born nine weeks early and quickly began to develop symptoms of an abnormal growth on his eyelid. His parents went to the doctors for help, but were turned away. The next closest doctor who would help them was 3,000 miles away.

When seven-month-old Oliver Francis was born nine weeks early, he had to be kept in the hospital for some time after his birth to ensure he was strong enough to return home. During this time, he began to develop a tumor on his eye.

This tumor, called capillary hemangioma, actually happens quite often during infancy. These growths only begin to form after birth and are usually benign, but for little Oliver, the growths caused his entire eyelid to swell up until he could no longer open his right eye at all.

Oliver’s parents, Tasha and Mike, went back to the doctor to receive medical advice, but the doctors simply prescribed Oliver with drugs that, they said, would reduce the effects of the swelling.

After administering the medication to their son for several days, Tasha and Mike only noticed that their son was beginning to suffer from nosebleeds, so they went back to the doctor for further guidance.

The only thing the doctor advised differently this second time was to increase the dosage.

Tasha and Mike knew this wouldn’t change a thing for their poor son.

They needed to find a doctor who would permanently remove the growth from their son’s eye. At this point, the swelling had continued and now Oliver’s eye was getting misshapen. If further, effective treatment was delayed for much longer, Oliver might even lose his eyesight.

The Francis parents knew they could no longer rely on their doctors.

They turned to the internet, where Tasha found the Little Baby Face Foundation, an organization based in the United States that could offer Oliver the surgery he needed.

The family wasted no time at all in booking an appointment and flying their entire family 3,000 miles to the States from their home in the UK.

And in just a matter of days, Oliver had his growth removed successfully – and completely free of charge.

Tasha said afterward, “It is all still sinking in. The doctors in America said that if we had not operated when we did he could have lost his sight. The foundation are [sic] absolutely brilliant. I cannot thank them enough.”