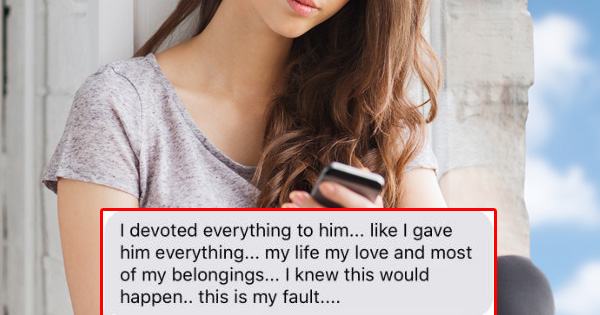 Her Boyfriend Finds Out She’s Cheating On Him. When She Tries To Warn Her Lover, She Realizes A Huge Mistake.

A woman named Dee sent the right kind of messages to the wrong kind of person, as shown by the screenshot images of a user who posted it on social media. Read on for more details!

A user named thirtysomething in Imgur posted a series of screenshots from its iPhone depicting an exchange of text messages between the user and a woman named Dee.

Dee was having a little bit of a dilemma. Okay, maybe a planetary of a dilemma—a heavenly body amongst small problems like not being able to be what your parents wanted you to be or not doing laundry when you literally have no clean underwear.

Anyway, Dee, according to the text messages, cheated on Kevin with a guy named Jackson. Dee claimed that she has no phone available so she used her father’s phone and texted Jackson just to warn him on what’s about to come.

Before we go further, here’s the full transcript of Dee’s conversation with the stranger:

“Hey it’s dee Kevin found out messages and we’re done. Left me with nothing… This is my dad’s phone just please don’t text the phone anymore. I don’t have it. And don’t text this phone back either…”

“What up Kevin how’s it going”

“Don’t worry about him dee. You don’t need him anyway.”

“Anytime you need someone to talk to I’ll be there”

“Okay, well please just don’t answer to any of his messages…. He completely tore up my house……”

“You won’t be able to… like I have nothing now… I’m a fucking mess… I seriously don’t know what to do….”

“Are you sure there’s nothing I can do?”

“I’m sure… the damage is done… he’s retrieved all of our messages is posting them and sending them to all his friends.”

“Well, yes, it is your fault. And if you truly devoted everything to him you wouldn’t have got involved with me. But you still might be able to fix it. He might just need a little time to cool down.”

“I agree... No he doesn’t care about me anymore… I’m dirt between his shoes”

“Well dee I hope you’ve learned from your mistakes. To be cheated on sucks and karmas a bitch. So use this as a life lesson and go in to your next relationship with all of your heart. And don’t cheat. But in my experience once a cheater always a cheater.”

“I truly do hope you get through this and I can tell that you’re hurt by this. Maybe Kevin will come around.”

“Just some random stranger that’s been cheated on.”

Cheating, no matter how insensitive and vile it might be, still has reasons or issues that have resulted to it. But getting cheated on sucks even more. Hopefully, Dee would learn a huge lesson from this because karma can definitely bite back and hard.

Luckily, Dee didn’t accidentally text a troll or a judgmental person. Because being slapped in the face with the truth hurts annoyingly. The person Dee accidentally texted claimed that he was cheated on before.

The person, however, showed sympathy and compassion to Dee. He even listened and understood Dee’s situation and really warned her about the dangers if she continues to behave in such a manner with her next relationship.

Whether the exchange of text messages is real or valid or not, the whole situation still feel real and relevant to what most relationships face, especially when things start to feel dull and routinely.

Some people cheat just feel like they’re doing something illicit. Sometimes, a feeling of straying from the usual routine with your partner could be enlivening.

But, most of the time, people could be very horrible and cheat because they can’t muster up the courage to tell their current official partner that they’re not happy anymore. Or worse, they like having the best of both worlds.

People who has the feeling that they could cheat should just stay single. There’s nothing wrong with being one. You just save other people from getting hurt.