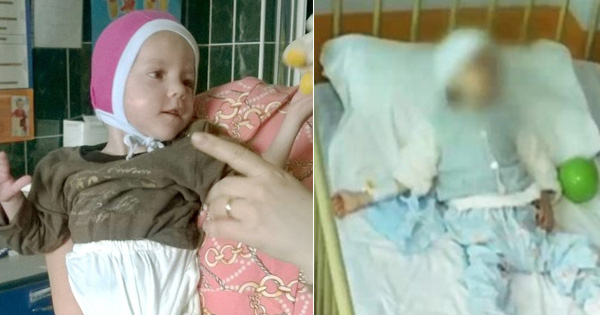 Social Workers Check On Little Girl. One Look At Her Neck Has Them Rushing Her To The Emergency Room.

A young girl from Romania was found clinging to her dear life after parents fed her nothing but corn puffs for five years. Read on for the full story!

A young Romanian girl was taken to a hospital after she fell severely sick from the food that she had been fed until she was five, according to Mirror.

Florentina Balanescu, or Flori, just weighed a mere 5 kg, or 11 lbs, after being fed solely corn puffs as soon as she was able to digest solid food.

Flori was immediately taken to the hospital after social workers found her fighting for her life in bed at home.

According to Mirror, Flori couldn’t talk. She didn’t have enough energy to hold her head up. As soon as she was taken to Santa Maria Children’s Hospital, she was given a drip and a special diet to make her gain weight that’s appropriate for child of her age.

Tighici said, “What we had before us was a child that was five-years-old which weighed no more than a three-month-old baby.”

“Her condition was so critical, we realized we didn't have the facilities to care for her properly and she was sent immediately to the specialist Children's Hospital in Iasi.”

Dr. Marin Burlea, the Head of Santa Maria Children’s Hospital, said, “You know you are a lucky child and I hope that this luck will stay with you for your entire life. I wish you happy times in your life, just the way you create happy moments for those around you.”

Burlea continued, “After getting through some difficult moments, fate has rewarded her now with a beautiful family who offer her all the love in the world. The little girl who used to call me ‘Dad’ is now a beautiful, joyful, smart and energetic child."

Flori’s parents, 39-year-old Mihai and 36-year-old Camelia, fed their daughter with Pufuleti, a popular corn puffs in Romania, ever since she was born. The couple had five other children, ages ranged between 4 and 11.

Mihai, the dad, claimed that they had no choice but to feed Flori junk food due to having already five other children. Flori is now in the process of being adopted by a nurse named Oana Cobilita.

Flori’s mom died last year. Mihai gave the permission for the child to be adopted.