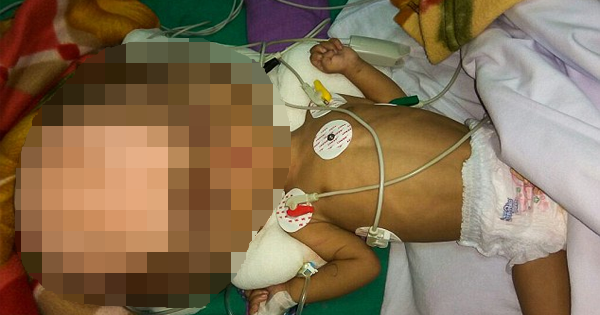 When He's Born, He's Diagnosed With A Condition That Causes His Head To Swell With Almost 6 Liters Of Fluid

Mrityunjay Das is only seven months old, but his head is the size of a watermelon. Doctors are desperately trying to reduce the size of his head before it’s too late to save him.

Seven-month-old Mrityunjay Das was diagnosed with hydrocephalus, a medical condition that causes huge amounts of fluid to build up in a child’s brain, when he was born.

Without proper treatment, the fluid in his head continued increasing until he was carrying around 5.5 liters of fluid in his skull.

The circumference of Mrityunjay’s head measured in at 96 centimeters.

Mrityunjay’s parents are desperate to reduce the size of their son’s head, not only to improve his cognitive abilities, but to also stabilize his growth and balance.

Dr. Dilip Parida, Mrityunjay’s main doctor, is pleased with their progress thus far. Over the past month and a half, they’ve managed to remove about 3.7 liters of fluid, reducing the swelling of the boy’s skull down to just 70 centimeters.

“[Mrityunjay] is stable and has responded well to the treatment,” Dr. Parida reported.

Parents Kamalesh and Kavita Das are also hopeful that their son’s recovery will improve their relationship with their village in Ranpur, Nayagarh, India.

Ever since the birth of their son and the emergence of his extremely swollen head, the entire Das family has been ostracized by neighbors.

“People would call our baby a ghost because of his unusual appearance,” Kamalesh recalled. He and Kavita are hoping that with the reducing of Mrityunjay’s head size, the name calling will stop.

Until further progress is made, the Das family will remain at the hospital where Mrityunjay is receiving treatment from all of his doctors and nurses.

We hope the little boy’s head will be restored soon, so he has a chance to live a carefree, normal life.