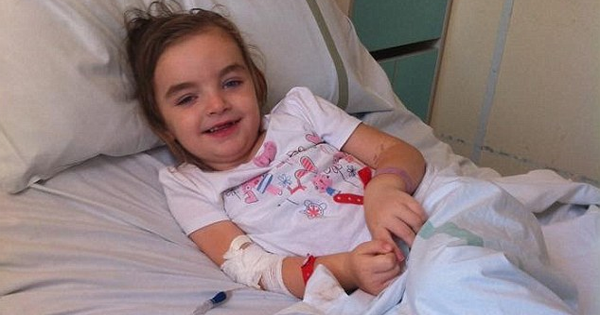 After Her Teacher Leaves Her Scraped Knee Uncleaned On The Playground, The Infection Forces Her To Undergo Open Heart Surgery

When Abbi Holland fell on the school playground and scraped her knee, everyone thought it would just be another one of those regular children’s injuries where cleaning it and covering it with a Band-Aid would let it heal. They couldn’t have been more mistaken.

Abbi Holland, a bright seven-year-old girl from Manchester, can no longer live a normal life all because four years ago, one of her preschool teachers failed to properly clean her knee when she fell over and scraped it on the school playground.

She was fine when she returned home that afternoon, but just a few hours later that night, she began to develop a fever that didn’t stop until it peaked at 109F.

Her family immediately rushed her to the hospital.

Abbi ended up remaining in the hospital for the next four months, fighting just to stay alive.

Her father, Dave, commented, “You just don't think this could happen as a result of a fall in a playground. It's an eye opener, that something so small and simple could be life changing.”

Although doctors were able to bring Abbi’s fever down that day, she ended up having to be admitted in and out of the hospital for the next four years.

Now seven years old, Abbi is recovering from a major surgery that she had to undergo just because she was infected with bacteria that fateful day she fell.

Back in 2013, when Abbi was first admitted to the hospital, the doctors’ initial scans showed that her cut hadn’t been properly cleaned. Bacteria entered her bloodstream and caused an infection that led to the leaking of her aortic valve, one of the valves connected to her heart.

Doctors administered every antibiotic they thought would help the little girl fight against the infection, but all of them proved to be ineffective.

It took several months for Abbi’s health to finally stabilize enough so she could be moved to another hospital, but there, the Holland family only received bad news again.

Abbi’s health would hold – but just for now. She would need surgery again in the future when the infection acted up again.

Indeed, in 2016, Abbi’s aortic valve was leaking again, and doctors said the only way to fix it was to perform open heart surgery.

“To be told that they are going to have to stop your little girl's heart and there's no guarantee they will be able to start it again is terrifying,” Abbi’s father, Dave said.

“Then to hear that if they did manage to there was a chance she could be brain damaged - well you wouldn't wish that on your worst enemy.”

Abbi’s parents aren’t trying to call out her school for their inappropriate treatment of their daughter’s injuries. Rather, they’re trying to get out a message of basic first aid and the importance of tending to wounds, especially those on children.

For the rest of Abbi’s life, she will have to be in and out of open heart surgeries as the infection continues to ravage her body, all because of one “simple thing.”

The family has since launched a campaign to raise awareness of simple first aid, and are now raising money to support the hospital ward that saved Abbi’s life in those first four months following her injury.

Please donate here if you can. Our thoughts and prayers go out to Abbi and her family.