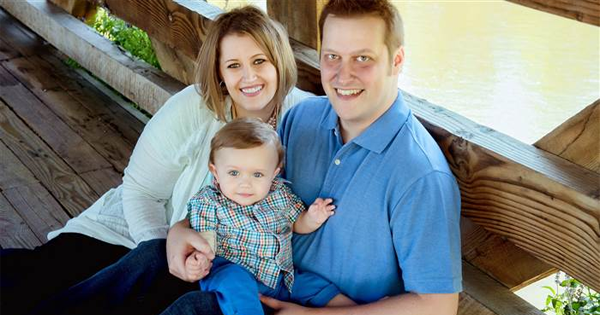 Before This Father Dies From Cancer, He Watches His Old High School Classmate Save His Son's Life

When high school sweethearts Ryan and Ashley Wagner finally got married after years of being together, they never realized that their life together would be so difficult – nor so short-lived.

Ashley and Ryan Wagner, now both 33 years old, met in high school and began dating then. They continued their relationship through high school and college, and then got married in July 2013. Just later that year, in December, they learned that Ashley was pregnant with a son.

The couple couldn’t have been more thrilled without how their life together, as a married couple, was beginning.

But then, Ryan’s supposed stomach bug took a bad turn. His doctor informed him; it wasn’t actually a bug. The pain that Ryan had been experiencing for several months was actually stage 4 colon cancer.

The diagnosis swept the family off their feet. No one in Ryan’s family had ever had history of the disease and Ryan, at the time, was only 29.

“It was a huge blow. It was really hard to digest and, of course, we were really hopeful that it was curable,” Ashley remembered.

But just five months later, the Wagners had the news broken to them. At stage 4, Ryan’s colon cancer was past being treated with chemotherapy. He had approximately five years to live.

The weight of Ryan’s diagnosis eased up a bit when their son Miles was born in August 2014. He brought a bright light into his parents’ lives and Ryan admitted that he drew strength from his son during that time.

“Miles has given both of us, especially Ryan, more reason to fight,” Ashley explained.

But when Miles was just a month old, he began to get ill. He was spitting up incredibly often and when his parents brought him to the doctors, they simply diagnosed him with acid reflux and gave him a prescription to treat the symptoms.

But two months later, the symptoms didn’t abate and then Ashley watched Miles suffer a seizure.

She rushed him to the ER where the doctor gave her grave news. Miles’ fever was being caused by a kidney failure.

He was diagnosed with primary hyperoxaluria, a condition where the patient’s body doesn’t produce an enzyme crucial to breaking down a type of sugar. The sugar then floods the body’s system, damaging the kidneys and other organs.

The only way to treat this condition for Miles was to completely replace his kidney.

The Wagner family waited in this status quo for 11 months, at which point, Miles was able to undergo liver transplant – a preliminary procedure that would help stabilize his health before he underwent the more major kidney transplant surgery.

Six more months passed, and Miles’ doctors said he was ready to undergo kidney transplant – but there were no available kidneys. And so the status quo persisted, with Ryan continuing chemotherapy and Miles holding on.

At that point, Ashley began to get desperate and turned to her friends on Facebook for help. “Is it on your bucket list to save a life?” she wrote one day.

One of Ashley – and Ryan’s – friends on Facebook, Elizabeth Wolodiewicz, saw Ashley’s post. She’d already been following the family’s health struggles for several years from the family Facebook page, Team Ryan, so when she realized there was a way she could help her old high school classmates, she knew she had to at least try.

Wolodiewicz and the Wagners had known each other in high school, but they had never been close. Wolodiewicz had been two years younger than the Wagner couple.

But for Wolodiewicz, that didn’t matter. “Shouldn’t it be on everyone’s bucket list to save a life?” she thought upon seeing Ashley’s post.

She reached out to Ashley, explaining that she and Miles shared the same blood type and she would get tested to see if she could donate her kidney to their son.

The Wagners were overwhelmed. They hadn’t realized that someone they knew so distantly would ever be so dedicated to helping their little family.

A stroke of positive news came before Christmas, when Wolodiewicz was confirmed to be a match for Miles. The surgery was set for February 2017.

As the date nears, gratitude constantly swells for the Wagners. “This kidney is a blessing for us. It is the last of the major surgeries,” Ashley explained. “It might be even more of a gift to us because of Ryan’s cancer. I think she probably doesn’t realize how much we appreciate the decision she made. It means everything to us.”

We’re praying that the surgery goes smoothly and that the Wagner family is granted many more years together.