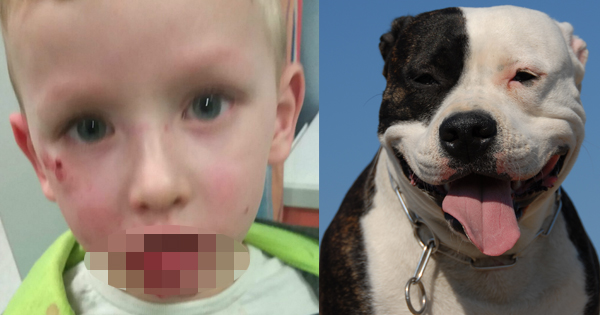 She Sees A Dog Approaching Her Son While He's Playing At The Park. She Tries To Warn Him, But It’s Already Too Late.

A four-year-old boy was playing at a park when suddenly a dog came running towards him. What happened next was truly a terror for any parent. Read on for more details!

Jonathan Bloor, four years old, was mauled by a dog while he and his family was hanging out in a park on a Sunday afternoon, SWNS reports.

Jonathan was attacked by a brown Staffordshire Bull Terrier that left him bleeding on his lip after the dog apparently bit a chuck off of it.

While Jonathan’s mom Gemma, 25 years old, was pushing the pram containing her one-year-old baby Josh, Jonathan and his seven years old sister Chelsea were walking ahead of their mom around noon.

Suddenly, Jonathan tripped into a ditch and the bull terrier just came out of nowhere and dug its teeth into the boy’s face. The dog then ran back to its owner. The incident happened in Blurton, Stoke-on-Trent, Staffordshire.

Jonathan’s lip was bitten off. He had to go for a reconstructive surgery to fix what was damaged.

The dog’s owner, however, didn’t even stop to check on what his dog had done. Gemma tried to call him from afar. But, he didn’t seem to care about it.

Gemma said, “We were walking along when Jonathan and his sister ran off ahead and I was behind pushing my baby’s pram. Jonathan fell over and so I turned to strap in my baby to go and help him up, but as I did I suddenly heard my daughter scream.

“I turned and saw this big brown dog sprinting from the woods. Then my daughter cried: ‘It bit him.’ I sprinted over, the owner was calling ‘Come’ to the dog and it ran back to him. I saw blood all over Jonathan’s face, my stomach just turned.

“I picked him up and he wasn’t crying or showing any emotion – the shock had hit him. When I first saw him, I was screaming. I was horrified. I was in more of a state than he was. That’s the person I gave birth to and that’s the person I’m supposed to protect from harm.

“I wouldn’t wish it on my worst enemy. The man must have heard, but he just walked off down the path. I couldn’t believe it, it’s sick.”

Gemma took Jonathan to Royal Stoke University Hospital. Jonathan’s grandmother came with her. It was unclear where the dad was.

“Doctors cleaned up the wound and they held the skin in place until a plastic surgeon could see it. He had reconstructive surgery in the morning and was in there for an hour-and-a-half.

“He had a few grazes and a puncture wound near his left eye, which didn’t require any treatment. The treatment was a success, but the surgeon said that the dog tore a muscle in his lip and that it would take a while to repair.

“It won’t fully realign and it will scar permanently. His speech has been affected. Other than that, he should make a full recovery. I feel guilty that I couldn’t stop it, even if I couldn’t control it. To know your child is going through that much pain is terrible.

“He has been a complete soldier – he’s been so brave. My daughter is distressed and traumatized. It’s something that’s going to stay with them for the rest of their lives. I don’t want this to happen to anyone else. I’ve walked that route many times without a problem.

“Lots of parents and their kids walk that route exactly the way we did, with their kids a little ahead of them. It’s best that I don’t say what I think of the owner. I would want more than an apology.”

Staffordshire Police Department had already confirmed that they began an investigation of the incident. They are now looking for the pet’s owner and question him about the health status of the dog and why didn’t he take responsibility for his pet’s actions.

A spokesperson said, “Officers visited the family involved on Thursday morning to check on the welfare of the injured child and, as a result, we are increasing the appeal to the public to see if they know any information.”

He continued, “We are concerned for the welfare of the child involved and every effort is being made to find the dog and the owner.”

Police are now asking others for help in identifying the dog and the owner.