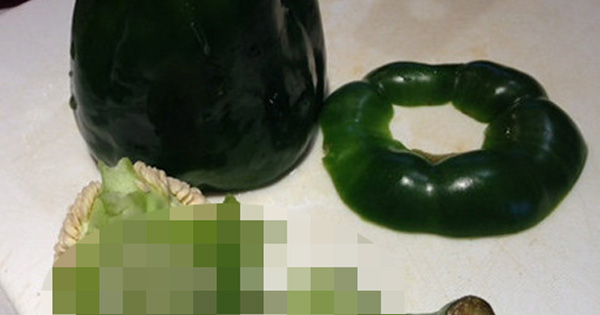 She's Cutting Up Green Bell Peppers For Her Casserole When Something Comes Out Of The Stalk. So, She Takes A Photo.

A woman from England was slightly taken aback by what she saw in the green bell peppers that she bought from Morrison. Read on for the full story!

Cindy Morris, 48 years old, had one of the biggest surprises of her life when she was busy cutting the vegetables that she bought from her local grocery store.

Morris, who’s from Dawlish in Devon, got a small yet cheerful surprise when, while she was slicing the green bell peppers that she bought from Morrisons, she came face to face with a, well, a face-like imprint from the sliced stalk.

Morris was planning to make a casserole that Friday and she was preparing the ingredients that she needed for the dish.

Morris told Exeter Express and Echo, "I thought it was lovely. I had got stuff for tea and had chopped up another pepper already. When I cut the next one I saw the stalk had a face on it. I called in my son Adam and said, 'you've got to look at this'. It really brightened up my day."

The imprint, or say, an accidental work of Mother Nature, resembled a smiley face typically drawn by anyone, varying ages, when they feel at least happy or cheerful.

However, like all things, whether good or bad, it came to an end. The quick yet blissful feeling Morris experienced will forever be in her mind, and in the mind of the readers of popular viral UK websites.

Morris said, "I had the stalk there for a day but it started to go off, so I chucked the happy pepper. It's still in my compost bin but it's gone brown now.”

There were no words on how Morris’ casserole turned out. Since the green bell pepper may seem magical, there could have been a chance that its effect had filtered through the entire dish.

According to Exeter Express and Echo, Morris posted the photo and details of the incident on Facebook, although it remained to be unfound. A representative of the Morrisons responded to the post and said that “it had made their night.”