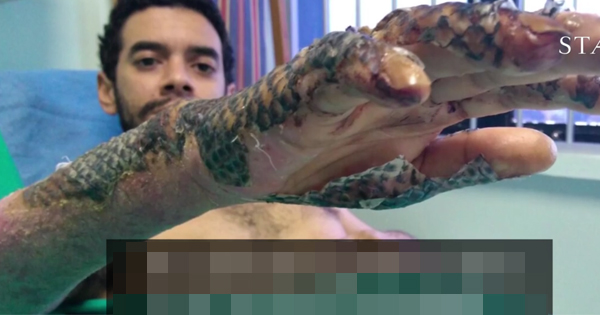 After Suffering From Burns, He Gets Covered In Scaly Silver Skin. That's When He Gets Scared For His Life.

After not having enough resources to fully cover the needs of burn patients, doctors in Brazil found a new and innovative technique to treat burn damages--with the use of fish skin. Read on for more details!

In a notable city called Fortaleza in northeast Brazil, there’s a new and emerging way of how doctors are treating burn patients. Patients who suffered burns are being covered in flayed skin of a sterilized tilapia.

Although it is still under the stage of testing, the use of the tilapia’s skin as a bandage for second- and third-degree burns among patients have becoming more and more popular. According to Stat News, the so-called innovation was formed due to an “unmet need.”

In developing countries, it was nothing new that animal skins are being used to treat burns. Since Brazil doesn’t really have the resources for human skin, pig skin, and other artificial alternatives that are profoundly available in the US, they had to improvise but with caution.

There are only three working skin banks in Brazil, which meant that only one perfect of the national demand can be met, according to Dr. Edmar Maciel, a plastic surgeon and burn specialist. Dr. Maciel is the one who’s pioneering the use of tilapia skin to burn treatment through his clinical trials.

Dr. Jeanne Lee, interim burn director at the regional burn center at the University of California, San Diego, said, “It’s a burn cream because there’s silver in it, so it prevents the burns from being infected. But it doesn’t help in terms of debriding a burn or necessarily helping it heal.”

The difference that using tilapia skin makes is that you don’t necessarily have to change and redress it. In the gauze-and-silver-cream combo, however, it has to be changed every day. It is also a very painful process.

With the tilapia skin, you don’t have to change daily and painfully because the fish skin glues in naturally. Tilapia, a fish very popular in Brazil, has been finding its skin being thrown away by farmers.

Maciel said, “We got a great surprise when we saw that the amount of collagen proteins, types 1 and 3, which are very important for scarring, exist in large quantities in tilapia skin, even more than in human skin and other skins.”

He continued, “Another factor we discovered is that the amount of tension, of resistance in tilapia skin is much greater than in human skin. Also, the amount of moisture.”

In the US, using tilapia skin as a mainstream way to treat burn will definitely face criticisms from the Food and Drug Administration and animal rights groups.

Lee said, “I’m willing to use anything that might actually help a patient.”

She continued, “It may be a good option depending on what country you’re talking about. But I also think the problem is that you need to find places that have the resources to actually process the skin and sterilize it, and make sure it doesn’t have diseases.”