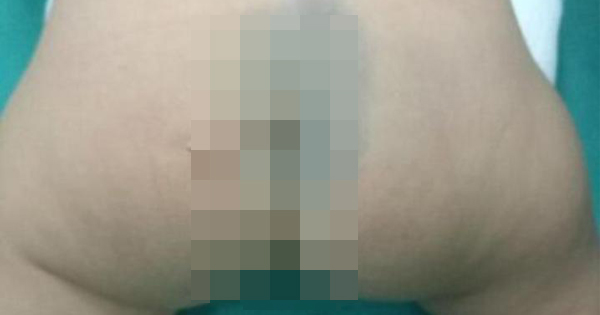 As Soon As Doctors See An 'Addition' Growing From The Baby's Spine, They Want To Remove It Immediately.

A little Chinese girl had been discovered with a deformity behind her back that's connected to the spinal cord. Doctors suggested that they should remove it immediately. Read on for more details!

A little girl from China had to undergo a surgery to remove a peculiar part found a little bit above her butt. Surgeons in China removed a part similar to a tail that was seemingly connected from the end of her spine. The girl, five months old, was born with the birth defect, The Sun reports.

The baby is now recovering in a hospital in Hefei, which is the capital of East China’s Anhui Province. She was born with a tail that was protruding from her spinal cord. Doctors concluded that they had to operate on her to remove it before it could cause any complication while she grows.

Dr. Meng Lixiang, who works at the Anhui Provincial Children’s Hospital, led the surgical team who handled the situation with the little girl. According to him, the patient’s tail was probably due to a deformity in her central nervous system. Dr. Meng then explained that it was different from a pseudo tail because it was directly coming from spine.

Dr. Meng continued that about 64 per cent of deformities in the central nervous system usually result to the appearance of tails or pseudo tails. Because the tail was “wrapped around” the little girl’s spinal cord, Dr. Meng and the other surgeons decided that it would be best for her to remove the tail before it could cause further complications with her health.

The tail could lead to a growth stunt. Other complications deemed possible were a loss of nerve function, hydrocephalus—build-up of fluid on a brain—and other problems related to the nerve.

The little girl made it through the operation, for it was only short and quick. The doctors do not expect to be worried for her health in the future. Dr. Qi Shiqin, from the hospital’s department of general surgery, gave a reminder to parents to always make sure that they go to every prenatal check-ups and consider treatments for their children as soon as they notice any abnormalities.

According to the information obtained by The Sun, “Human embryos have a tail that measures around one-sixth of the its size. But, as the embryo develops into a fetus, the tail is typically absorbed into the rest of the growing body.

“In rare cases, babies are born with a soft tail, which contains no vertebrae. It is full of blood vessels, muscles and nerves and is caused by an abnormality rather than a true tail. Typically, these tails will be removed soon after birth, during a quick operation.”