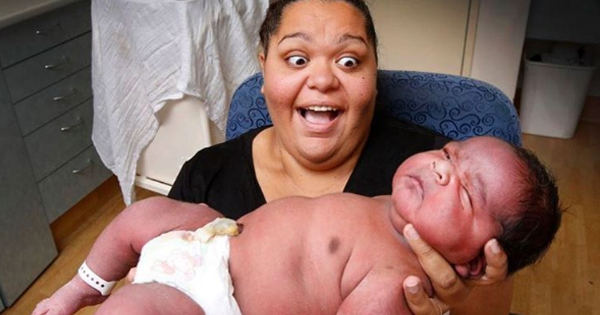 This Woman Gives Birth To A Really Heavy Baby Without Epidural.

This mom's newborn is nearly twice the size of an average baby. She delivered him without a strong pain relief. Read on for the full story!

Natashia Corrigan, of Melbourne, Australia, had given birth to three children already. But her fourth one became her most memorable yet. Natashia gave birth to a boy who weighed a whopping 14 pounds. Just to give you an idea about how significant that was, babies normally weigh 7.5 pounds.

According to the Herald Sun, Natashia knew that her baby was going to be huge when she had her scan for the 36th week of her pregnancy. She was just anticipating that a huge one will come right out of her own vagina.

Natashia and the doctors knew that the baby would be heavy, they just couldn’t tell the exact weight. So, when the time came and the baby was born, everyone was completely surprised.

Brian Liddle Jr. holds the record of being the heaviest baby born at the Mercy Hospital for Women in Heidelberg. He still had four more weeks and five days before his height and weight to grow, but he’s already weighing 13.22 pounds.

Natashia said, “I’m still finding it hard to believe. But by the end of term, I was struggling just turning in bed and walking up the stairs at home.”

Natashia and her partner, Brian Liddle, currently live in Preston. With him and her sister Kurriki Ellis by her side, she gathered all of her strength to give birth with pain relief gas. She wasn’t given an epidural, so a “laughing gas” was administered, which is 50% nitrous oxide and 50% oxygen.

Natasha said, “They kept me strong and calm when it seemed like chaos was happening around me. Because he was so big it was a bit hard to get him out, and they had to get a few extra staff members to come in and help.

“I’ve always wished for a little fat baby. This is the first pregnancy I’ve got to experience a natural labor, the longest I’ve ever been pregnant and I’ve got the fat little man that I wanted.”

Natashia gave birth in January. She posted a video on Facebook showing her baby Brian was doing just fine.