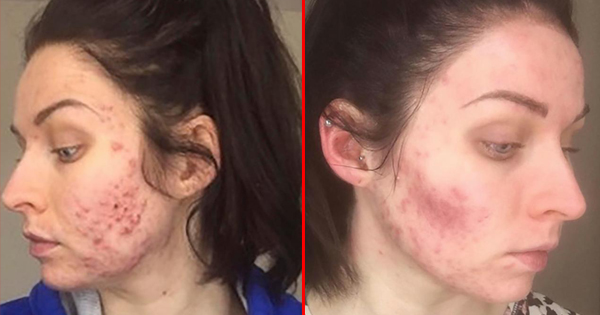 To Get Her Face To Clear Up From Acne, She Has To Give Up Something—And Her Boyfriend's Not Happy.

A woman had to give up something that her boyfriend wanted in order to get her clear face back again. Read on for more details!

Two years ago, Judith Donald realized that she was a late bloomer, for bright red spots of acne suddenly bloomed on her face at the age of 23. This time, however, the outbreak had spread all over her body. Cysts and pustules covered her face, chest, and back. Donald refused to go outside because people thought that her adult acne was chickenpox, according to The Sun.

Judith said, “Right up until the age of 23, I had perfect skin. Then I woke up one morning and had these bumps on my head. I have no idea what triggered it. It can be linked to stress, and having the acne made me even more stressed so it got worse.

“Psychologically it has been really hard. It completely ruined my self-confidence and spent a long time very unhappy in my skin.”

Judith tried everything that she can to relieve herself from the acne and clear her skin, but nothing worked. So, she decided to visit a dermatologist and was prescribed with Roaccutane. Now that she’s 25 years old, Judith felt like herself again after her skin cleared up. She had to use the drug for 90 days.

There are some serious side effects, but Judith claimed that she didn’t regret anything.

Judith said, “It was a hard decision and everyone told me not to (take Roaccutane). You don’t hear anything positive about it. It has been linked to suicides, it can cause depression, hair loss and liver problems. Even knowing all that, I felt like the side effects had to be better than how bad I was feeling about myself before.”

Some of the side effects that she experienced were nose bleeds, bad migraines, loss of sex drive, bloody lips, and tiredness.

Judith said, “Things like the loss of libido must have been pretty frustrating for my boyfriend but it’s better than me not ever wanting him to see me without makeup on. He has been so supportive, it’s amazing. And he can see how much happier I am now.”

A couple of years ago, Roaccutane was investigated for it’s possible link with the occurrence of twenty suicides. Roche, the health care company based in Switzerland, said that “no causal link” was discovered.

Simon Rivers, Roche’s Country Medical Lead in the United Kingdom, said, “We are committed to optimizing the use of our medicines. Thus, ensuring clinicians and patients have the information they need to make informed decisions for the best outcome for the patient.”