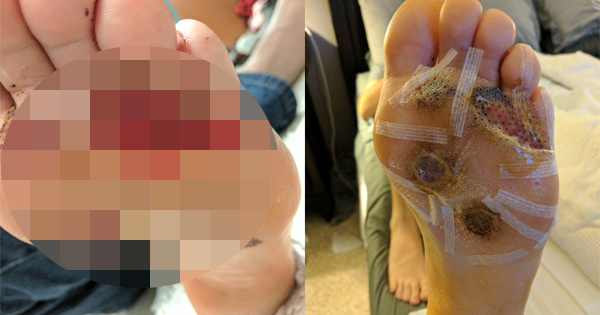 He Takes A Shower At The Gym. Later, He Notices A Spot On His Foot. Then, More Start To Grow. Months Later, He Can't Walk.

Little did this man knew that the warts he thought was growing on his foot was actually bacteria eating his flesh. Read on and see the images!

A man decided to speak with The Rod Ryan Show on KTBZ-FM The Buzz about the dangers of taking a shower without any foot protection in the gym. At first, he thought it was just warts. But when it started to spread, he realized that his foot was infected with flesh-eating bacteria.

The man told The Rod Ryan Show, “It started while I was training for my first ever half marathon. Over my lunch break, I would make a point to go to my local gym and run for a bit. I had never run such a long distance before, so I wanted to make sure I was ready.

“Normally, I would make sure that I had all of the necessary supplies in my gym bag for after my run. There were a few occasions where I left out my flip flops that I would use when I showered, but not wanting to go back to work sweaty and smelly I made the decision to shower barefoot."

“Within a fairly short amount of time, I noticed there was a spot on the bottom of my foot that began to itch.

"When I touched it, it was a bit harder that the rest of the flesh around it, but I didn't think anything of it. I figured I had just stepped on something and it was my body's response to the foreign object. I quickly found out that I had contracted a plantar wart on the bottom of my foot."

The man had used different methods and treatments to what he once thought was a wart with vinegar, duct tape, OTC, and banana peels. It took him six months until he finally reached the rational conclusion to seek help from a medical professional.

The man said, “One wart quickly turned into five. When the treatments no longer worked, I moved to another doctor closer to my house. I went through the same treatments, but at a much higher concentration.

"My entire foot would swell and the pain was so bad, I couldn't walk. I couldn't even put my leg down as the blood rushing to my foot would cause the skin to swell and put me in excruciating pain.

"I had surgery in February and last week was the first time I was able to put my foot in a shoe. I have not been able to go to the gym, and have been riding around on a knee scooter due to the open wounds on my foot. I underwent a skin graft trial (grafts made from North Atlantic Cod!) and things are finally starting to close up."