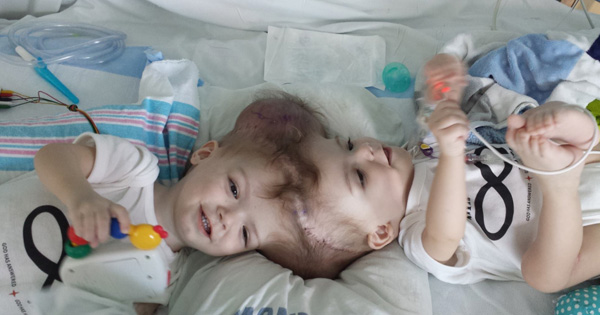 Parents Quit Their Jobs To Care For Their Conjoined Twins. 27 Hours Later, The Boys Are Wheeled Out Of Surgery

Read on to find out more about the risky and lengthy surgery performed to separate these twin boys.

Can you imagine having a twin that you never got to see? This was the case for a pair of twin boys who were born attached at the head. Unable to see each other for 14 months, the duo went through intense 27 hour surgery to separate them.

Anias and Jadon McDonald were born conjoined by the crowns of their heads. Last October, the two were successfully separated after being attached for 14 months. The surgery took 16 hours to detach their heads from one another, and then another 11 hours to reconstruct their skulls. The boys shared more than 5 centimeters of brain tissue and they had entwined blood vessels as well. Not only was the lengthy surgery extremely risky, but expensive, too: the procedure cost 2.5 million dollars.

Christian and Nicole, the boys’ parents, both quit their jobs to focus on their sons’ well-being and be close to the hospital at all times. Knowing that the surgery came with its risks, the couple was committed to doing everything they could for the young boys, especially since the risk of mortality for combined twins is more than 80% if they are not separated before the age of 2.

While there was concern that the surgery could cause developmental damage or even death for one or both of the boys, the procedure was a total success. Christian and Nicole were immediately brought to tears when they saw each one wheeled out separately after the surgery.

Not only that, but the twins recovered surprisingly quick, too! In fact, their recovery was the fastest ever recorded for a surgery of this nature.

“Although his recovery has been bombarded with infections, fevers, and difficulty breathing and eating, I can say with absolute pride that today Jadon has almost fully recovered and is attempting to roll in his bed as we speak. He is nothing short of a miracle...My Anias. Beautiful baby. His journey is going to be much harder than Jadon’s. I’m not sure why this child always has to climb the steep mountains, but he does. For the last four weeks, he has not moved much on his own, but has demonstrated the ability to move both arms and both legs when crying. I try desperately to hang onto all the positive progress he has made.” Nicole wrote on Facebook.

Perhaps the most wonderful part of this whole ordeal, was being able to see little Anias and Jadon cuddling with one another for the first time! Having been unable to see each other for so long, it was a miraculous sight to behold, and they seem to be enjoying this newfound experience with one another.

The boys’ family could not be more grateful for this new beginning they have been given. After many months of worry, struggle, and sleepless nights, they are finally all together.

It is clear that this family has gone through a lot, but they are excited for all of the happy memories they now get to create.

What do you think of this amazing story?