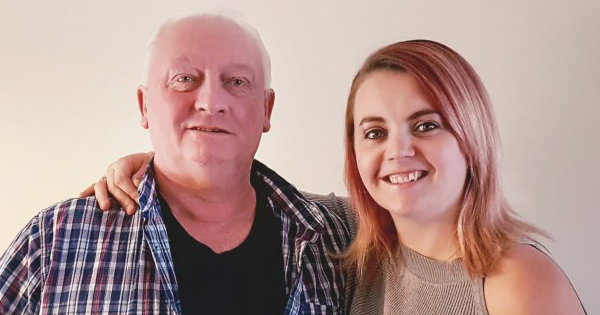 When Her Dad's Illness Comes Back, Daughter Wants Him To Drink Her Breast Milk.

A dad and his daughter attempt to fight off a serious illness with the help of her breast milk. Read on for more details!

Fred Whitelaw, 64 years old, won his fight with bowel cancer when he was diagnosed in 2015. He remained in remission until last April, when the cancer came back to fight him again. Whitelaw’s daughter, Jill Turner, 30 years old, just gave birth to her baby. She came up with an idea to help her dad after she had come across a medical research.

Since she’s still lactating, Turner wanted to give some of her breast milk to her dad after she read that the milk could aid in eliminating cancerous cells. She gave birth to her baby Llewyn last October. She’s been producing milk more than her baby needed, so she didn’t hesitate to give some of it to Whitelaw.

According to Metro, Whitelaw initially didn’t want to do it; it would be weird for a father to drink the breast milk of his own daughter. However, he came to the conclusion that doing it so wouldn’t really hurt him as he’s got nothing to lose.

Turner, who’s from Rugby, Warwickshire, said, “I was devastated when I found out about my dad’s diagnosis. I wanted to help him in any way I could and that’s when I started to give him my breast milk. I was researching online when I came across an article for alternative uses for breast milk.

“Since then my husband, Kyle, 30, has used it on his eczema and we have also used it on Llewyn’s conjunctivitis. But when I mentioned to my family that it has links with cancer they thought I was joking. Never did I think that my dad would agree to drink it. But he too realized he had nothing to lose and thought, ‘Why not try it?’”

Turner went to get a double pump to produce more breast milk that be enough for her baby and for her dad. But she would always make sure that her baby actually has enough first.

Whitelaw had been taking the breast milk for only a month. They haven’t done any tests if there are any changes. They have to do it for another month or so to get a better perspective.

Turner said, “Everyone has been really supportive, my mum even bought us a table top fridge that we keep in the kitchen and anything in there is for my dad. Breast milk lasts for eight days so I mark each container with a sell by date to ensure dad knows what he can drink.

“He doesn’t drink it on its own though. For now, he has it in coffee but I’m hoping he will also have it in his porridge if I can express enough. I just want to do anything that I can to help and I don’t see the problem in giving my dad something that is natural.”

Although Whitelaw had a successful operation in killing the cancerous cells, not all of them were removed. At first doctors thought that he had to stay in the hospital for weeks, but he left after eight days. Nothing can stop him from fighting for his life.

Turner said, “A scientist has found a protein in the milk that can help kill off cancer cells without harming other cells. At the moment, it’s just trial and error, there isn’t much research available, which is a shame.

“I know there is a professor in Europe who has been researching the effects but no one has taken her seriously yet. Hopefully she will get the funding she needs to carry it further.

“I’m not clued up on the portions but I just hope it makes some sort of difference. We will be seeing an oncologist in four weeks’ time who regularly takes my dad’s bloods so it will be interesting to see if there is any change in his levels.”

So far, there are no follow-up reports about Whitelaw's health. The fundraising campaign that the family started hadn't really taken off. They've only received £20. Turner wrote on the page: "He was in for 5 days and while there, they pulled his scan forward to check the chemo was working. Unfortunately the news wasn't good as the chemo hadn’t worked; therefore the cancer has grown again. We are now awaiting the next chemo in tablet form."