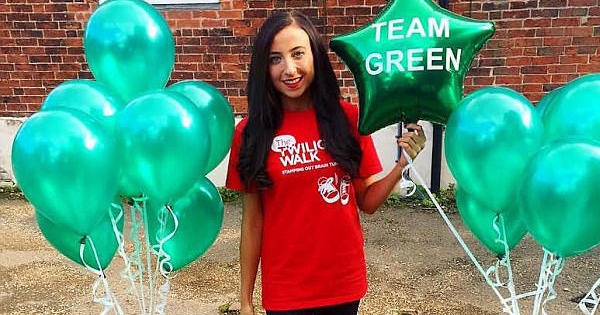 College Student Has 'Food Poisoning' For Weeks, Then Starts Shaking. Now She Is Fighting For Her Life.

A college student in the UK is refusing to let her devastating diagnosis get her down after her "food poisoning" turned out to be something heartbreaking. Keep reading for the full story!

A college student in the UK was completely blown away to learn that her food poisoning was actually nausea from an inoperable brain tumor.

According to The Daily Mail, 25-year-old Charlotte Green was in her final year studying at Worcester University when she began experiencing severe nausea and shaking.

After days and weeks of barely being able to get out of bed, Green finally realized that she definitely did not have food poisoning or a stomach bug.

Although her doctor put the strange symptoms down to “stress,” Green knew something more serious was going on inside her body.

In 2014, Green finally discovered that she had a rare and incurable brain tumor called anaplastic astrocytoma.

“I can barely recall that time.  I couldn't get out of bed I was so sick. I assumed I had food poisoning,” Green said. “At the time I was in my third year at university and had quite a lot of assignments to hand in, and I was applying for a PGCE course.”

“I can't really explain it, but I just felt really strange. During lectures I wouldn't hear words or parts that my lecturer had said- it was like I'd lost my normal focus,” she added. “When my mum took me to A&E it was the first time a medical professional had seen the shaking first hand. That's when they gave me a scan.”

Although doctors were unable to operate on the tumor, once she received a second opinion and discovered that the tumor was cancerous, Green began radiation treatments.

“I was in total shock. I was devastated when I had to leave university,” Green said. “The type and location of the tumour I have means it is very difficult to operate without causing permanent damage.”

“The way I coped with it, as well as with my partner Nick, family and friends, was to know everything I could about it,” she added. “I would do my own research and have a long list of questions when I went to see my doctor.”

Despite the devastating diagnosis, Green has refused to let her cancer diagnosis stop her from living.

“My type of tumour doesn't have a cure at the moment,” Green said. “Since my diagnosis, I have been to a number of amazing places in the world, including Australia, which I have been lucky enough to experience with my brilliant, supportive partner Nick.”

“I don't know when my time will come. I've researched the statistics and asked medical professionals but I have realised that nobody can give me an exact prognosis,” she added. “It's a terrible thing for my family, partner and my friends. But we cope with it by dealing with it together and supporting each other.”