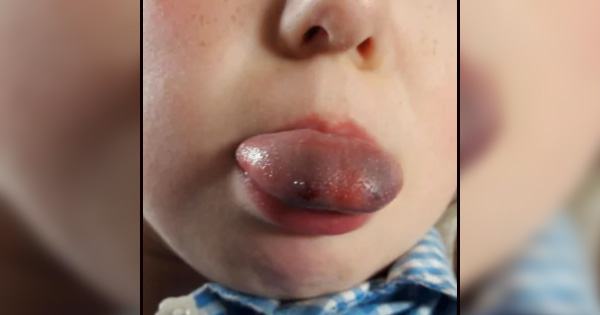 Girl Takes A Sip Of Water At School. Moments Later, She Can't Move Her Tongue - At All. That's When She's Rushed To The Hospital

She could not move her tongue at all. She was terrified. Moments later, she was being rushed to the hospital.

Disney has been forced to remove a mug from its shelves after a 7-year-old girl managed to get her tongue stuck to the lid for four hours.

Megan Donald was reportedly at school in Kirkintilloch, near Glasgow, when her tongue accidentally got stuck inside the opening of the lid on her Monsters, Inc. cup.

Because the opening was so small, Megan reportedly could not wriggle her tongue back out.

Natalie Donald, the little girl’s mother, is now warning other parents about the mug to ensure no other children suffer the same pain that Megan did.

Donald, 31, claims she was called to Megan’s school around 10:30 a.m. after teachers had tried and failed to extract the 7-year-old’s tongue from the opening in the cup.

"The mug was still attached and full of water so it was very heavy, a teacher was holding it up," Donald said. "They couldn't unscrew it because of the suction inside the cup. It was airtight. Megan was panicking and very upset."

Although Donald was able to slip her hand into her daughter’s mouth and move her tongue away from the hole for long enough to get some air in, Megan’s tongue was so swollen that it still remained stuck in the opening.

"Her tongue was really swollen and quite purple," Donald said. "The ambulance arrived but said they would have to take her to A&E. The doctor there said he had never seen anything like it before so it was trial and error for them."

Staff at the Royal Hospital for Children in Glasgow attempted to reduce the swelling with ice and dextrose, but Megan’s tongue would not budge.

Ultimately, they had to resort to bolt cutters and a hacksaw to remove Megan’s tongue from the children’s cup.

"They then got someone down from dentistry who gave her a local anaesthetic in her tongue which was really painful for her," Donald said. "She was screaming and I had to hold her down. It was very upsetting for both of us. But they still couldn't pull the lid off."

After four hours, Megan’s tongue was finally removed from the cup, but she was in so much pain that she could barely eat for days after the incident.

"This is undoubtedly an unfortunate incident that we've taken seriously by immediately stopping sales of the mug from our stores and websites and destroying all other existing stock," a Disney Store spokesman said.