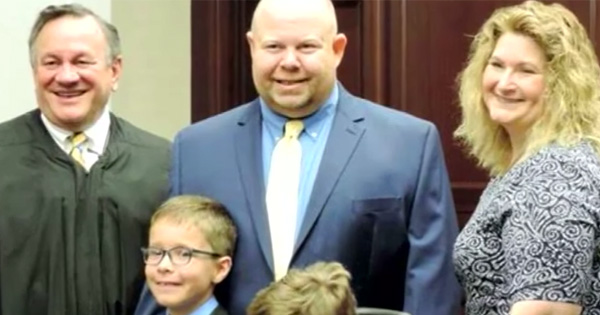 Couple Finds The Perfect Child To Adopt, But There Is Only One Thing They Need To Do If They Want To Take Him Home

Read on to find out what this family had to do to make sure they could bring their adoptive son home.

Becoming an adoptive parent is an incredible and unforgettable experience. Couples who decide to adopt a child have such enormous hearts, and it’s wonderful to see them making a kid’s dream of a family come true. One Florida couple was getting ready to adopt their son, but they didn’t plan on taking another child home with them as well.

8-year-old Dawson and 11-year-old Dalton are brothers who have been in foster care for the past 4 years. The boys’ caseworker believes that Dawson could have gotten adopted earlier, but he hasn’t been able to. The reason? Dawson refuses to go anywhere without his older brother. Because Dalton has cerebral palsy, finding a family to adopt him has been much more of a challenge. The young boy also has epilepsy and in nonverbal.

While both boys want to be adopted, of course, Dawson simply cannot bear the thought of being split up from his brother.

“I wanted to keep my brother, so what I did was pray and pray for many years,” the 8 year old boy said. “I was like, ‘I hope that they’re going to adopt Dalton too.’”

Robbin and her husband, Steven, had been wanting to adopt for awhile. As soon as they met Dawson through Adopt America, they knew that they had to make him part of their family.

“He was this cute little kid with glasses, and loved Legos and superheroes. I thought, 'I’ll try and see if we would be a good match.'" Robbin recalled.

Dawson’s caseworker asked the couple if they would be interested in adopting Dawson’s brother- an 11-year-old child with cerebral palsy- as well.

Robbin admits that the caseworker’s proposition made her “nervous” at first. However, the more she discussed Dawson and Dalton’s needs with the case worker, Robbin realized that the absolute best thing would be to keep them together.

So, Robbin and Steven became parents to 2 young boys instead of 1!

The news made everyone so happy, but no one was more thrilled than Dawson. After years and years in foster care, he was finally going to a loving home with his brother by his side.

“I was so excited they were adopting Dalton and me so that we can stay together. I thought that was pretty awesome.” the young boy said.

“I try to make sure they know that being together is the most important thing.” Robbin said. She also says that having the boys together has been nothing but positive for both of them, as well the family as a whole.

“Dalton has made leaps and bounds from when we first got him,” Robbin said. “Dawson works so hard in school and is always looking after his brother.”

Congratulations to this wonderful family! What do you think of this story?