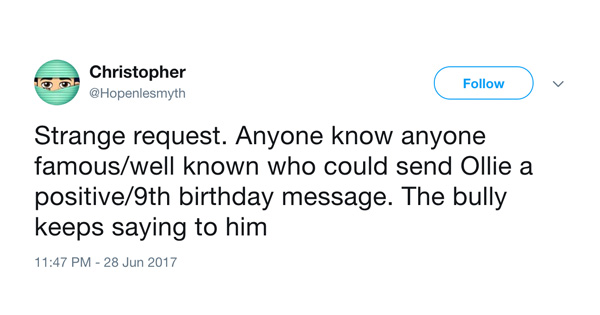 Dad Asks For The Internet's Help After His Son Is Bullied. The Response Is Overwhelming

Read on to find out how the internet reacted to this dad's request for birthday wishes for his son.

You know the old saying, “ask, and you shall receive”? In the case of Christopher Hope-Smith from Leeds, England, that phrase definitely rang true.

On a whim, Christopher sent out a tweet that read: "Strange request. Anyone know anyone famous/well known who could send Ollie a positive/9th birthday message"

Apparently, his son Ollie was being bullied, and Christopher thought the birthday boy could use some kind words. “The bully keeps saying to him that everything O has, he has bigger/better/more often. O excited for his birthday but keeps being told it won't be as good as his own. I would be so grateful and I appreciate it is an odd request. Just would love someone to tell him he does mean something & bullying is not.” he wrote.

Even though Christopher knew his request was “strange”, he thought it couldn’t hurt to ask! Plus, he knew seeing birthday wishes from famous people would definitely make his day.
Thankfully, the internet responded in a wonderful way. It didn’t take long for Christopher’s post to get retweeted tons of times, and the stars started to take note.

Eric Keyes, the illustrator for “The Simpsons” even drew Ollie his very own birthday picture!

Monica Lewinsky, the England football team, and astronaut Tim Peake sent positive messages too.
Needless to say, Christopher was completely overwhelmed by the response. He responded to the star-studded thread by letting everyone know that he would share all of the amazing messages with Ollie on his birthday, July 5th.

"I am completely overwhelmed by everyones kind thoughts. You do not know what this means to me and will to Ollie when we show him. I have been battling with this matter for over a year and am only just now being listened to. It is heartbreaking listening to an 8 year old think that he is worthless and 'shouldn't be here'." Ollie’s mom Natalie wrote. "I know that we are definately not the only ones in the world to be going through this but I just want to say, from the bottom of my heart 'Thank You' so much. You really don't know what this means."

Look at all the difference a kind word can make in someone’s life!