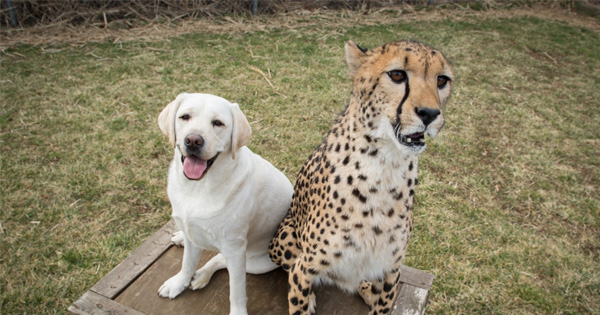 Read on to find out why zoo cheetahs and rescue dogs have been seen hanging out with one another!

When we think of cheetahs, we immediately think of their speed, strength, and stamina. The graceful big cats are the fastest animals around, not to mention beautiful! However, thanks to Twitter, many people recently learned that cheetahs are extremely nervous animals as well. Before you begin to feel bad for the stressed out cheetahs, don’t worry! Many zoos actually provide these nervous creatures with an emotional support animal to help.

That’s right, cheetahs are partnered up up with emotional support dogs to aid with their stress. Twitter user Andy Stardust enlightened the online universe with this adorable information, including images of the cheetahs with their canine pals.

“Just learned that Cheetahs are really nervous animals, and some zoos give them "support dogs" to relax” he wrote alongside the images.

The post quickly went viral for its undeniable cuteness, but it also left many people wondering if this was actually something that zoos do.

A piece from Think.Co helped shed some light on the subject. The article says that the San Diego Zoo Safari Park has been using dogs as emotional support for their zoo inhabitants since 1980! For the cheetahs in particular, the dogs help the cheetahs relax, which helps when it comes to breeding.

“The primary goal of comforting cheetahs through this unusual partnership is to make them at ease in their captive environment so that they will be able to breed with other cheetahs. Shyness and anxiety don't bode well for a breeding program, so the inter-species friendships that the cheetahs are able to form with dogs can actually benefit the long-term survival of this rare cat.”

"The dogs enlisted by the Park are typically rescued from shelters, giving these homeless canines a new purpose in life."

Many humans use emotional support animals such as dogs, cats, and even miniature horses to aid with stress, so it makes sense that animals might need them too!

Regardless of how you may feel about zoos or animals in captivity, this is a pretty fun animal fact! It's great to know that various zoos are doing their part to keep their cheetah residents calm and happy.

Did you know about this?