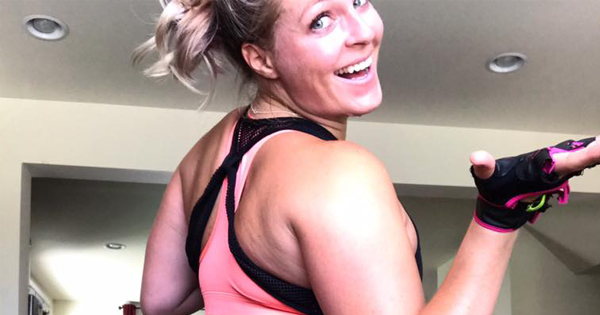 Mom-To-Be Spots Something On Her Body She Has Never Seen Before, Then Gets Angry. That's When She Realizes Why She Feels That Way

A fitness blogger is opening up about the shocking changes her body has already gone through during the first trimester of her pregnancy. Keep reading for the full story!

Nothing can prepare a woman for the changes her body will go through during pregnancy, especially when those changes come quickly.

Thanks to TV and movies, we have this idea that a pregnant woman’s belly is the only part of her body that grows throughout her pregnancy.

But that’s simply not true. Most women gain weight and swell all over when they are expecting—and it can be a shock even for them.

That’s why Ashlie Molstad, who runs the popular blog Foodie Girl Fitness, was so shocked when she realized that she was already getting cellulite during the first trimester of her pregnancy.

In an inspiring new post on Facebook, Molstad opens up about the shock and eventual acceptance she felt after making the new discovery:

I'm growing a human, which means I KNOW my tummy is going to grow. And at some point I figured the rest of me would expand a bit too. I just didn't expect it so soon. I didn't expect my thighs to spread and be covered in these little polka dots we call cellulite.

I've never actually had a problem with cellulite- as a result of my genetics I suppose. Yes, my booty had dimples when I flexed it. Always has. Always will. But it hasn't ever expanded down my legs... until now. And at first I was like, oh no! It's the first trimester, if this is happening already, what are you going to look like nine months from now?!

But here is what I have decided. While I was much quicker to judge them than to love them, I know it is not about me. I've been tricked into seeing these thigh constellations as flaws by people who put millions of dollars into selling me thing to "fix" them. The entire diet industry profits on us thinking we're not good enough. It wants us to hate ourselves- that's how it thrives. And I've given my fair share of money to that industry. I did support it with self hatred... for about 31 years of my life.

But cellulite wasn't even a thing until someone cane up with a "solution" to make it go away. Seriously, before that it was a natural part of human flesh... ever seen a baby bottom? They all have dimples and we think they're adorable... why did we grow up and decide otherwise?!

So instead of feeling embarrassed over the new way my back side looks, I'm just taking it as a reminder of all the incredible things my body is doing right now to grow another life and then bring it into this world.

The diet industry wants me to hate myself? Too fucking bad. I'm a badass bitch who CAN GROW ANOTHER FREAKING PERSON. And you want me to be ashamed of butt dimples?! Pah-lease. I'm magic. My body is magic. So keep your creams and wraps and whatever else you've made to banish these bumps. I'm gonna rock the shit out of them. And I hope you'll rock yours too.

Since sharing this story on Facebook last week, Molstad’s post has been liked more than 8,000 times, with many fellow moms praising the mom-to-be for accepting her body as it is.