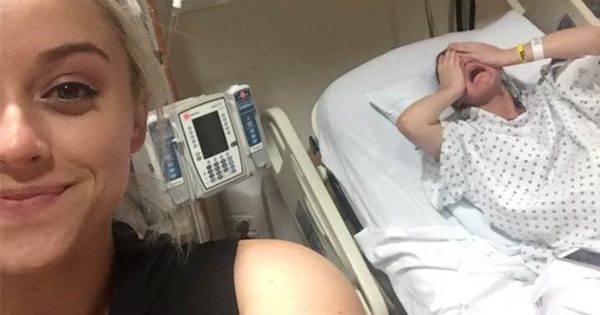 Read on to find out how this soon-to-be mom felt about her sister snapping a selfie during her delivery.

There’s is no denying that giving birth is insanely painful. Even with an epidural, delivering a baby is probably the most intense, exciting, terrifying, and excruciating experiences a woman can go through. Because of this, it is understandable why a soon-to-be mom would be rather picky about who she has in the delivery room with her. While it’s exciting to be surrounded by your loved ones, you’re also going through some crazy body changes, and it’s important to have people you trust to support you through the whole ordeal.

20-year-old Kimberly Ramirez obviously thought having her sister, Kat Armendariz in the delivery room with her was a no brainer. It’s her sister after all! So, when Kimberly was ready to welcome her first child into the world, Kat was there by her side, armed with a camera as well.

However, Kat didn’t exactly support his sister in the way Kimberly had planned. Instead of holding her hand, helping her with breathing exercises, or even capturing the baby’s arrival on film, Kat took the opportunity to take a selfie.

With her sister writhing in agony behind her, Kat smirks up at the camera in the now-viral photo.

Since Kat is a mom herself (she has two 8-year-olds, 4-year-old twins and a 4-month-old baby), she thought it would be hilarious to document her sister going through a process she knows all too well.

“I totally want to take a selfie right now because I've already had my turn.” she said.

As funny as the picture is, Kat did get her sister’s permission to take it and share it online. After taking the funny selfie at around 3 in the morning, Kat stayed by her sister’s side through the entire delivery. Kimberly was in labor for about 15 hours before welcoming her son Zayden into the world.

While the photo of Kimberly may not be the most flattering, she admits that she was thankful for the distraction during her intense labor pains. "I was starting to have labor pains, so it wasn't pleasant feeling that. I thought the photo was funny and it helped me ease the pain." she said.

It’s pretty special that these sisters have been there to support one another through all the deliveries, and that this moment could be shared with the internet. Kat’s happy that her selfie could lighten the mood during such a huge moment, and of course, she’s thrilled that her kids now have a new cousin to play with!

Sometimes, we all want to showcase our pregnancies in the perfect light, with glamorous maternity photos and “welcome new baby” pictures. But for these sisters, the silly selfie will always be a reminder of the day they welcomed baby Zayden together.

"When (Zayden) grows up, he'll be able to see that his debut was wild.” Kat said.

What do you think of the picture?