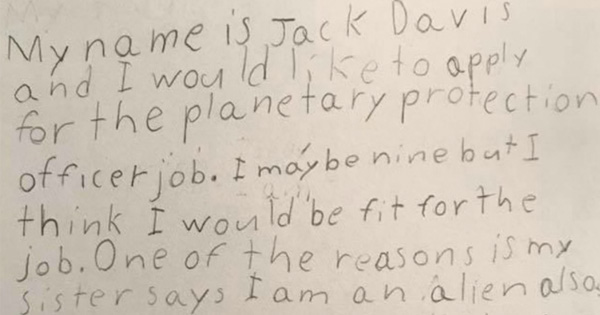 Read on to see the amazing response NASA gave to this 9-year-old boy who wants to be a Planetary Protection Officer.

Do you remember what your dream job was when you were younger? Whether your ambitions were most realistic, like a firefighter or a policeman, or more fantastical, like a superhero or a lion trainer, so many of us dreamed about being an astronaut. Kids and adults alike are fascinated by space, the planets, and everything unknown in the vast solar system. Being employed by NASA takes a lot of work and a lot of smarts, but one 9-year-old boy named Jack Davis definitely felt like he was up for the challenge.

Jack decided to apply for the role of Planetary Protection Officer, a position he felt he was perfect for. For his application, he wrote NASA a well thought out and handwritten letter to show them what they were missing out on.

“Dear NASA,” Jack’s letter begins. “My name is Jack Davis and I would like to apply for the Planetary Protection Officer job. I may be nine but I think I would be fit for the job.” he continues.

“One of the reasons is my sister says I am an alien. Also, I have seen almost all the space and alien movies I can see. I have also seen the show Marvel Agents of Shield and I hope to see this movie Men In Black. I am great at video games. I am young, so I can learn to think like an alien.”

Okay, if this isn’t the cutest letter you’ve ever seen, we don’t know what is. The staff at NASA couldn’t agree more, and they knew they had to respond to Jack’s persuasive application letter.

“Dear Jack, I hear you are a “Guardian of the Galaxy” and that you are interested in being a NASA Planetary Protection Officer. That’s great!” he writes.

““Our Planetary Officer Position is really cool and is very important work.” he continues. “It's about protecting Earth from tiny microbes when we bring back samples from the Moon, asteroids and Mars.”

“We are always looks for bright future scientists and engineers to help us, so I hope you will study hard and do well in school! We hope to see you here at NASA one of these days!” his letter concludes.

So, while Jack didn’t get his dream job, he got a pretty amazing letter from a NASA scientist! We have to say, this response is pretty great, and we’re sure Jack was thrilled to receive it.

9 may be a bit too young to join the NASA team, but hopefully this letter inspires him to reach for the stars (literally!).

What do you think of this sweet story?