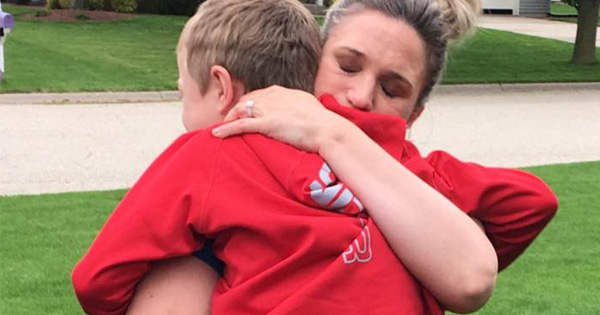 After Her Son's Devastating Doctor's Appointment, Mom Drives Home And Goes On Facebook. What She Posts Leaves Everybody Speechless

Read on to find out what this police officer did for a family in need that she didn't even know.

What would you do if your child needed an organ transplant? It’s safe to say the most, if not all, parents would do everything in their power to help their child get healthy again. While donating organs is not uncommon, it can be hard to find a donor with the matching blood type to make the transfer.

Kristi Goll is a mom who was desperate to do anything she could to help her son. Jackson, her 8-year-old son was in need of a living kidney donor. Knowing that she had to exhaust every resource she could think of, Kristi hopped on Facebook with a plea for help.

After a devastating doctor’s appointment showed that Jackson’s liver was not improving, she reached out to the world of social media to see if there was a living donor available for her son.

“The doctors still explained the very best situation would be finding a living donor for Jackson. I always knew these days would come, it's just so hard when they are here. I have reached out before, I am just trying again to see if we can find anyone out there that would be interested in being tested.” she wrote. “Social media has the ability to go a long ways, and Jackson's transplant social worker reassured me of this.”

After contacting the University of Wisconsin Transplant Program, Lindsey was determined to be the perfect match for Jackson. Lindsey called the entire incident “fate”.

Even though Lindsey didn’t know Jackson or his family, she was more than happy to donate her kidney to the young boy. As it turned out, though, the police officer and Jackson’s mom had mutual friends, so they were able to get connected easily. After finding out that she would be able to donate her kidney, Lindsey surprised the family at their home with the good news.

The moment meant everything to both Kristi and Jackson, and she shared the incredible news on her Facebook page, complete with some tear-jerking photos.

“After months of searching for a kidney donor for Jackson... I can say "the search is over!!" I can't even put into words how amazing of a gift we are receiving from this amazing person.” Krist wrote. “She surprised us after work today and I still feel in shock. Jackson is so excited and says "I think my new kidney will make me run faster!" Today you became our hero”.

What do you think of this story and Lindsey’s act of selflessness?