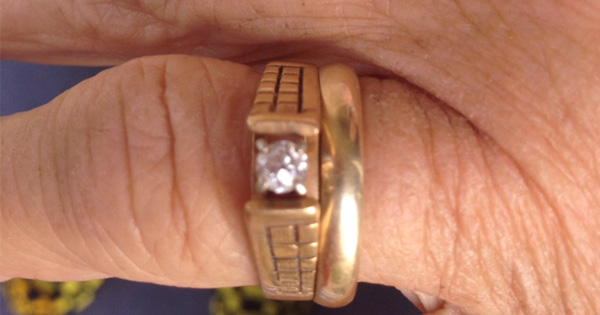 After Losing Her Wedding Ring 13 Years Ago, It Turned Up In The Most Unexpected Place

Read on to find out how this woman had her wedding ring returned to her after it went missing more than 13 years ago!

Losing your engagement or wedding ring is probably one of the worst feelings imaginable. Not only are you now without a beautiful piece of jewelry, but you feel terrible that you’ve lost such an important item given to you by your partner. Many people have their rings insured, but it is an awful feeling to know that you may never see such a prized possession again.

Mary Grams knows this dreaded feeling all too well. While many people are guilty of losing their engagement rings at the beach, Mary’s fell off while she was out in garden in Alberta, Canada. Back in 2004, Mary was pulling some weeds at the time she thinks she lost her ring. She looked everywhere for her precious ring, but was unable to find it. Needless to say, she was devastated.

"We looked high and low on our hands and knees. We couldn't find it. I thought for sure either they rototilled it or something happened to it. I didn't tell him, even, because I thought for sure he'd give me heck or something.” she said, speaking of her husband, Norman.
Norman passed away 5 years ago, and had given the ring to Mary back in 1951!

Worried that the loss of the ring might have caused an argument between the two of them, Mary had the ring replaced, and Norman was none the wiser.

While the issue had been all but solved, Mary was still sad that never was able to find her original ring. That is, until 13 years later, when her daughter-in-law was out in the garden. Mary’s daughter-in-law, Colleen Daley, was out working on their family farm when she pulled up a carrot that looked rather strange. Wrapped around the carrot was Mary’s wedding ring!

"I knew it had to belong to either grandma or my mother-in-law. because no other women have lived on that farm.” Colleen recalled. “I asked my husband if he recognized the ring. And he said yeah. His mother had lost her engagement ring years ago in the garden and never found it again. And it turned up on this carrot."

Mary could not have been happier to have her ring back after all these years. Another amazing part of the story? The ring still fit her finger perfectly!

Can you believe this incredible tale?