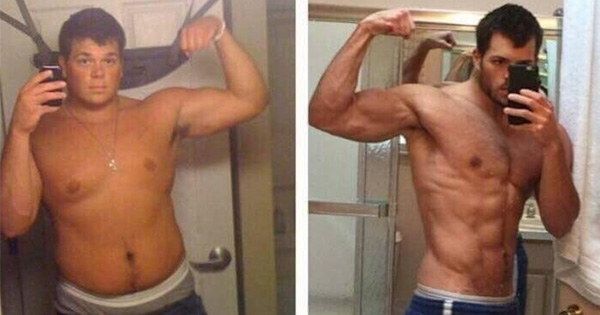 Read on to learn about Mark Jansen's incredible body transformation before joining the cast of Big Brother.

It’s easy to think that personal trainers are people who have always been fit, active, and healthy. If you’re a fan of the reality television show Big Brother, than you’re familiar with personal trainer Mark Jansen from New York. The extremely fit contestant bonded with fellow houseguest Elena Davies, but it turned out he was hiding a secret many never knew about.

Prior to joining the CBS show, Mark’s physique looked very dissimilar than it does today. As it turned out, the super ripped personal trainer was not always in such great shape.

In two photos recently shared on Reddit, you can clearly see that Mark used to be much bigger and unhealthier than he is now. The 26-year-old went through a major diet and exercise shift, and the transformation is clear!

Many fans were shocked to see such a difference, and a lot of them were left inspired by his change as well.

“I played football for a year at University Buffalo and I graduated. I was a big boy," Mark told Jeff Schroeder, another Big Brother alum. "I weighed about 330-340 and then I knew I had to get in shape." he admitted.

"I always wanted to be in the fitness industry and I knew I had to lose some weight. So I started losing weight, I lost over 100 pounds and got into body building and then people started asking me how I did it. So I started helping people and I just fell in love." Mark revealed.

Not surprisingly, Mark has clients back home who adore him and his training, and he misses them while being on the show. It’s week 6 in the Big Brother house, and the recent Power of Veto competition has secured him for at least 1 more week. While the other houseguests are getting nervous about Mark’s “tough guy” persona, he promises that he’s a good guy. As a self-proclaimed “people person”, he feels that he won’t have a hard time making alliances.

“I have to admit, I did not care for Mark when the cast reveal was unveiled, but after hearing his story and seeing him on feeds, I think he really is a good guy. Plus, what a transformation. I would bust my @$$ to get even half as fit as Mark and be happy with that.” one fan wrote on Reddit.

Mark's fitness transformation before and after from BigBrother

Growing up heavier and raised solely by his mother has definitely made an impact on his personality. If he does win the competition show, Mark wants to give back to single moms and children who have lost their parents.

"I'm a big teddy bear. I usually tell them, 'Don't tell anyone I said that' because I like the whole tough guy persona but as soon as I smile, it's hard to hide." he said on the show.

Mark’s story is one that many people can relate to, it’s not impossible for our weight to get out of hand, and feel like there’s no way to reach your dreams. Mark was passionate about becoming part of the fitness industry, so he turned his life around!

What do you think about this Big Brother contestant’s amazing transformation?