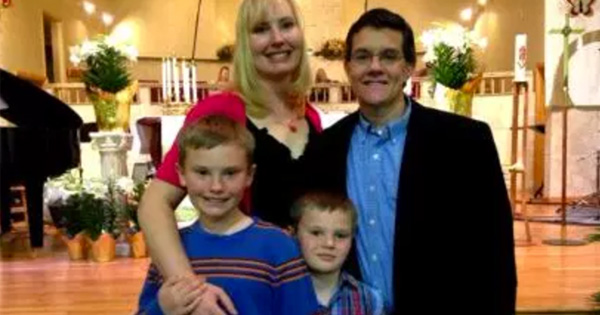 No One Thought This Man With 98 Brain Tumors Would Survive- But Years Later, He's Still Here

Read on to see how this father who was diagnosed with 98 brain tumors in 2012 is doing today.

These days, it seems like everyone knows at least one person who has been affected by cancer. Maybe you yourself have survived cancer, or are still battling it today. No matter what form of cancer an individual has to endure, it is never easy, and people affected by the condition need all the support they can get.

A 46-year-old man named Leland Fay received a cancer diagnosis that is almost too terrifying to believe. In 2012, doctors found out that the father of 2 had 98 tumors in his brain. The news left him “shocked and devastated”.

Leland had no idea when he went in to see his doctors that the news would be that bad. Initially, he had an irregular spot on his head, which turned out to be an aggressive form of melanoma.

Unfortunately the cancer spread quickly, and he soon had tumors in his stomach, liver, and lungs. In the fall, doctors had found 98 tumors in the father’s brain.

Needless to say, Leland’s doctors were “not optimistic” after such a diagnosis. For the next few years, Leland sat through vigorous radiation treatments and scans, as well as undergoing brain surgery in an attempt to remove the tumors in his brain.

"I have seen many patients like Leland. The difference is that in the past ... we would not have tried to treat someone with that many tumors.” Dr. Robert Breeze of the UCHealth-University of Colorado Hospital said.

During all of this, Leland’s sons were only 8 and 5 years old. Despite everything that was going on, Leland knew that he had to stay strong for his little boys.

“It’s one day at a time. We’ve always been really honest with our boys. We always kind of let them know what was really happening and to just enjoy the days we have together.” the loving father said.

Leland’s positive attitude, strength, and fortitude clearly payed off, as his most recent brain scan came back clear! Doctors are understandably a bit hesitant to say that the father is cancer-free, but things are definitely looking better after such a grave diagnosis 5 years ago.

"The probability of someone with that many lesions responding well is small ... but he did much better than our data would have predicted." Dr. Breeze said. Leland has definitely beaten the odds.

With the first bit of positive news Leland has had in quite some time, he’s looking forward to spending some quality time with his family, and enjoying every moment he has.

“I’m just kind of surviving one day at a time. We hope that things are gonna be great but there’s no guarantee at this point. This is kind of the new normal.” he said.

“I had probably the worst cancer diagnosis you can have, and I’m still here.”