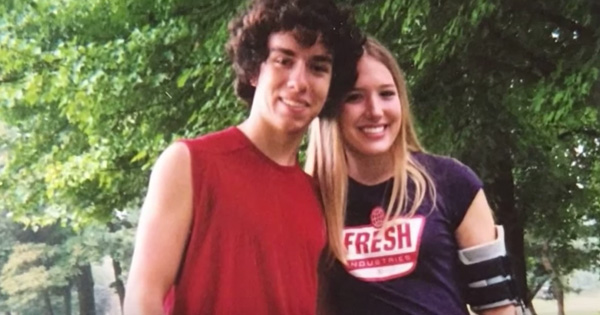 Right Before Taking His Own Life, Teen's Phone Vibrates. What Happened After That Changed The Course Of His Life Forever

Read on to see how an unexpected phone call changed the life of one depressed and suicidal teen.

10 years ago, Kevin Walsh was seriously considering ending his own life. Unbeknownst to him at the time, the woman who called him at the perfect, life-saving moment would end up being his wife.

“I was probably somewhere between 5 to 10 seconds away from taking my own life,” Kevin recalled. “Nobody but her could have spoken a word of reason to me.”

However, someone did. Kevin met Blake while at summer camp when they were both just 13. One random day, Blake came up to Kevin while they were taking archery classes and told him that black was a good color on him.

“I was like, ‘At least she’s talking to me; she’s the prettiest girl I had ever seen,' Kevin said of the interaction.

The two remained friends for quite some time, even while living in different states. They stayed in touch via AOL instant messenger and phone calls. While they ended up seeing each other again at the same camp next summer, they eventually lost touched and stopped speaking.

At around the age of 17, Kevin said that he fell into a deep depression and struggled with suicidal thoughts. When his mental state became too much to bear, Kevin made the decision to take his own life. He wrote up a suicide note and planned to slit his own wrists.

However, right before Kevin was about to commit this heartbreaking act, he felt his phone vibrate in his pocket. He ended up answering it, and it was Blake on the other line.

“I was basically staring down the barrel of my own mortality,” Kevin said. “It was her. We hadn’t talked in a year and the one person I believed I would have opened up to called at that exact moment I had let everything go and was at peak vulnerability.”

During the call, Kevin told Blake that he was planned to end his life, but she urged him not to.

“Literally, all she said in that moment was, ‘What? Don’t do that,’” Kevin remembered. Then Blake made Kevin promise to answer her call the next day.

“That kind of hit me weird because I wasn’t expecting to be around tomorrow,” Kevin admitted. After that incident, Kevin decided not to go through with the suicide, and answered Blake's call the next day, like he promised.

The two stayed in touch after that, and eventually fell in love.

“I think it’s a true example of a force in the universe intervening and connecting us. I get goosebumps every single time I talk about it.” Blake said.

In 2015, Kevin popped the question to the woman who saved his life, to which she said yes, of course! The two were married 5 months later, and are still madly in love.

During Kevin’s vows to Blake, he said the most perfect words to encapsulate what brought them to this place: “I love you,” he told her “Also, thanks for saving my life.”