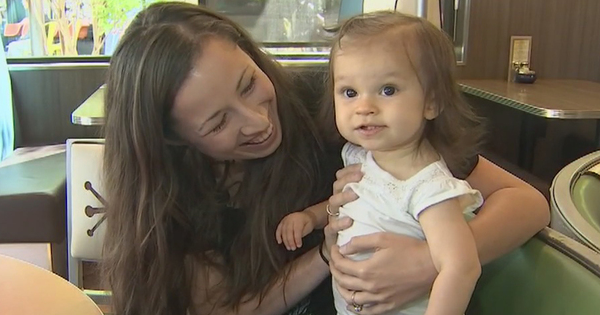 Waitress Notices What Mom Is Doing With Her Baby In The Restaurant. Then She Leaves Her A Note With Her Pancakes

A breastfeeding mom in Arizona was brought to tears when a waitress left her a touching note along with some free pancakes for breastfeeding in public. Keep reading for the full story!

Public breastfeeding tends to be a touchy subject for people all over the world. Everybody has their own opinion on whether or not it should be deemed appropriate for moms to openly breastfeed, especially without a cover.

With all the controversy surrounding breastfeeding in public, one Arizona mom was brought to tears when a waitress at a restaurant she was dining at actually went out of her way to thank the mom for proudly breastfeeding her baby.

"I didn't expect any of this," said Erica Chambers. "I just wanted to pat another mom on the back."

At the restaurant where Chambers works, each server is given the opportunity to give about three pancakes a day away to any customer they think deserves something a little extra special.

When Chambers saw Isabelle Ames nursing her daughter in the restaurant earlier this year, she instantly knew who she wanted to give her pancakes to.

According to FOX 10, Ames was eating at the restaurant with her family when she realized her daughter was hungry.

She didn’t think much of it until she received some complimentary pancakes along with a note that read: “Thank you for breastfeeding here. Much love and respect. Erica.”

"I started crying and gave her a big hug," recounted Ames. "She just told me we have to support each other and have each other's backs."

For Chambers, breastfeeding is a deeply personal subject.

As moms, Chambers and Ames both know that public breastfeeding is often a controversial topic.

"I think it was so important to share, because I've been so worried throughout my breastfeeding experience that someone would have a negative reaction and come up to me," said Ames. "So to have a positive reaction and have that face-to-face was really cool."

After their story went viral, Ames and Chambers said they hope their positive experience can inspire other nursing moms to feel more comfortable breastfeeding in public from now on.