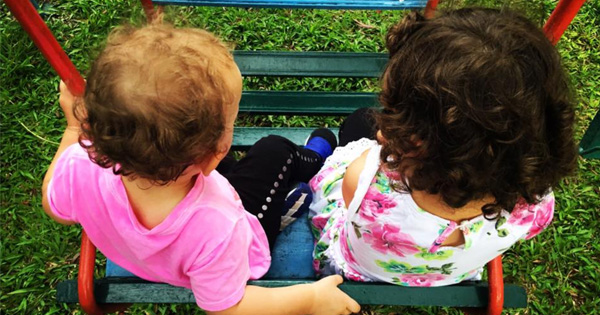 Read on to see how this potential salary email made this stay-at-home mom come to some major realizations in her life.

Being a stay-at-home mom is definitely a full-time job in it’s own right. You can’t really take vacation days or call in sick from being a parent. Thought you don’t exactly get paid for being a parent (at least not in the traditional salary sense), there is no denying that it’s hard work.

Rasha Rushdy, a stay-at-home mom for more than 3 years, received an email that “sent her on a trip to a parallel universe”.

She took to Facebook to explain further: “It was one of those salary guides that recruitment companies often publish, with rough ranges of likely salaries in your line of work,” she wrote. “Out of curiosity, I scrolled through it. My eyes widened incredulously at the numbers in front of me - what I could have been making if I hadn’t become a stay-at-home mom. My mind started racing down that path a little further: the title I could have held by now; the places I could have travelled to with my job and the experience I could have gained.”

Rasha admits that she immediately started panicking and thinking about all the “what ifs” in her life. She began to think about the “parallel universe”, the one in which she was never a mother, and what that world would be like for her.

“I wouldn’t have half-moons quite this puffy under my eyes. I wouldn’t have those scars, or those irreversible, yet hard-to-exactly-identify changes in my body. I wouldn’t have that gap in my resume, on which, although it is the greatest and most important work I have done, society has yet to place the right value. I wouldn’t have the worries and anxieties that I do about re-entering the workforce - have I forgotten everything? Has my brain turned into mush? How will I ever balance it all? I wouldn’t have any of that.” she admitted.

However, she of course thought about what life would be like without her children, and that was a universe she never wanted to live in.

“But then, I wouldn’t have them. Them. The ones I'm responsible for raising, nurturing, and loving.” she discovered. “The ones who test my patience in a way I never could have imagined. The ones who have turned a mirror inwards and forced me to grow, just when I thought I was already a grown-up and had it all together.”

“I wouldn't have learned what limitless really means. You think you love them, and then another day passes, and the well of your love burrows further into the rich earth of your heart. You think you can't anymore, and another terrible, sleepless night passes, and somehow, you can, again.”

Though Rasha admits that she will occasionally venture into that parallel universe in her mind, she knows that there is no career, no salary, or anything that could ever take the place of her children. The love she has for her family will always take precedence over any “could have” experience.

“I will take those trips down memory lane, and those trips to the land of Could and Would Haves, but my children have not limited me. Giving up my former career, for now, for them, has not limited me. It's changed things, sure, and it'll influence the curves and bumps in my path going forward.” she writes. “But I'll take it - every last little bit - because there is no way I'm giving up what their existence has given me.”