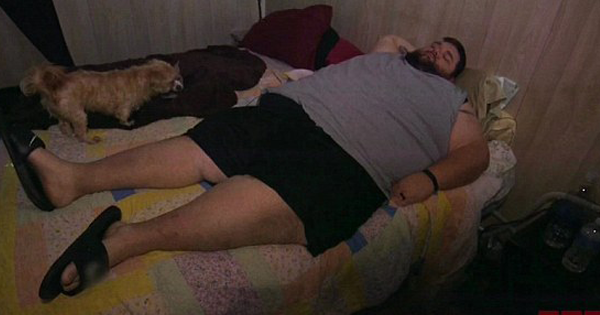 After losing more than 200 pounds, a man in Oklahoma claims his addiction to sleep ended up destroying his marriage. Read on for the full story!

After losing more than 200 pounds, a man in Texas claims his marriage was destroyed when he replaced eating with a sleep addiction.

33-year-old Gideon Yeakley, from Oklahoma, recently appeared on the TLC reality show “My 600lb Life,” after relocating his family to Texas to be closer to his weight-loss surgeon.

At 650 pounds, Gideon explains on the show, he couldn’t help out around the house at all, let alone get a job.

For years, Gideon’s unhealthy lifestyle put a major strain on his relationship to wife Kayleigh, who felt like she was doing everything on her own.

Gideon had always struggled with his weight, but it wasn’t until his mother died about eight years ago that his addiction to food spiraled out of control.

As his emotional eating continued, Gideon finally found love when he met Kayleigh, who never cared about his weight.

Although she loved that Gideon treated her son, Jonathan, like his own, Kayleigh knew their marriage had hit a rough patch when she became the sole provider for the family.

While Kayleigh worked, attended school, and raised Jonathan, Gideon told “My 600lb Life” that he could barely move because the extra weight left him in so much pain.

Finally, Gideon realized it was time to make a change and he turned to Houston-based weight loss surgeon Dr. Younan Nowzaradan for some answers.

During the first consultation, Dr. Nowzaradan explained that Gideon would be a perfect candidate for gastric bypass surgery if he lost 50 pounds.

A month after the surgery, Gideon was already down to 537 pounds—and the weight seemed to be melting away overnight.

But even though his body changed, Gideon’s habits did not.

Instead of searching for a job or helping around the house, he slept all day, barely able to move from the couch.

After speaking with Dr. Nowzaradan, Gideon realized that his energy levels were plummeting because he was using rest as a coping mechanism to deal with the loss of his food addiction.

As seen on the show, Gideon’s constant sleep habit placed such a great strain on his family that Kayleigh finally took Jonathan and went home to Oklahoma.

It’s been six months since Gideon began his weight loss journey, but he’s finally started seeing a therapist to help work through his constant fatigue.

Now 429 pounds, he’s mustered up the energy to secure a job back home in Oklahoma, and he can finally enjoy physical activities outside with his wife and son.