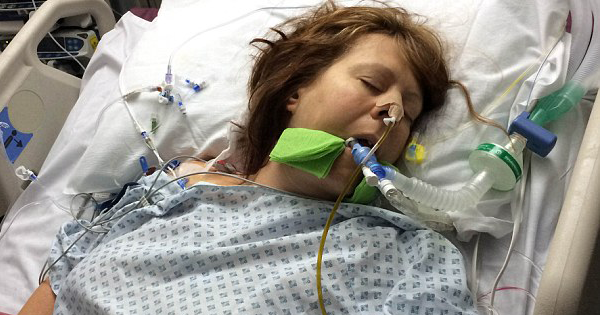 A woman who woke up one morning looking very pregnant was quickly diagnosed with a rare cancer that took six of her organs. Read on for the full story!

A mother who woke up one morning looking like she was three months pregnant had to have six organs removed, after doctors realized she was suffering from a deadly cancer.

44-year-old Sandra Currie had gained more than 40 pounds in two years, but she never suspected that anything was wrong with her health.

Although she generally felt “under the weather,” Currie wasn’t concerned until she woke up one morning with an extremely bloated belly.

“It had flared up into a big pregnancy shape overnight - I literally measured three months pregnant overnight and that was in February,” she said, The Daily Mail reported.

When Currie finally arrived at the hospital, near her home in Scotland, nobody had any idea what was causing her severely bloated stomach.

Thankfully for Currie and her family, a surgeon at Victoria Hospital had previously encountered a patient with similar symptoms, so she was quickly diagnosed with the rare cancer.

Currie had pseudomyxoma peritonei, or PMP, a deadly cancer that typically begins in the appendix before invading the abdomen.

PMP, which produces a jelly-like fluid in the body, is what killed Audrey Hepburn in 1993.

“They told me the prognosis wasn't good and of course I went home and Googled it, which was the worst thing I could ever have done,” Currie recalled. “I was told I needed surgery, and needed it as soon as possible.”

It took 19 hours of complicated surgery for doctors to remove Currie’s gall bladder, spleen, omentum, appendix, ovaries, uterus, and part of her diaphragm.

After the grueling surgery, Currie immediately had to be taken to England, where she underwent a “chemo bath” treatment.

While the recovery took about six months, Currie said it wasn’t long before she started feeling like herself again.

“It's an amazing treatment for people who were fit and healthy before,” she said of the chemo bath. “It's definitely worth it for the life you can get back.”