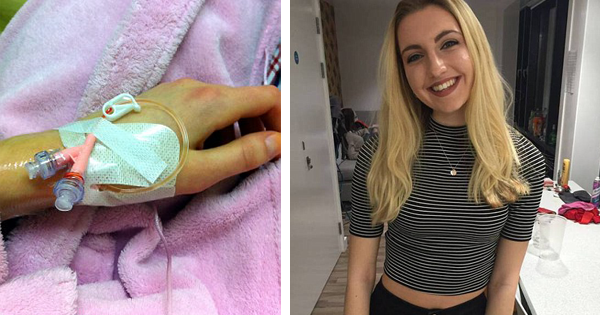 An 18-year-old girl in the UK nearly died from a serious blood clot two months after she started taking birth control pills to treat her acne. Read on for the full story!

An 18-year-old girl in the UK nearly died from a life-threatening blood clot after her doctor prescribed birth control pills to treat her acne.

Madison Brownley, a student at Birmingham University, was forced to spend nearly two weeks in intensive care after a deadly blood clot nearly took her life.

Now, for the rest of her life, Madison will have to take blood-thinning medication and virtually stay away from alcohol, as even a nightly glass of wine could kill her.

On top of all this heartbreak, Madison can never again use hormonal contraceptives—the very reason she was rushed to the hospital in the first place.

While speaking with student newspaper The Tab, Madison explained that her problems began just two months after her doctor prescribed her birth control pills to calm her acne.

“One day, I woke up and got in the shower,” Madison recalled. “I stretched one foot out to find that it was painful and stiff. I also found it difficult to bend my knee, and my left leg felt tight.”

“I suddenly felt faint and realised that my right leg was swollen and red, and my toes were purple,” she continued. “My mum and I immediately went to A&E, where it quickly became apparent from the reactions of the medical staff that there was something seriously wrong.”

An emergency scan of her abdomen and leg revealed that Madison had “extensive clotting” that required a number of painful procedures to treat.

For the rest of her life, Madison will have to stay on the blood-thinning drug Warafin, typically given to elderly individuals suffering from heart problems.

Although Madison is still devastated over what happened to her, she hopes her story can warn other women about the dangers of taking the Pill.

“I can't go on the Pill again but what would be the best situation would be to have people have blood tests to check its safe for them,” she said. “I know it's not common but it's definitely not as rare as doctors suggest.”