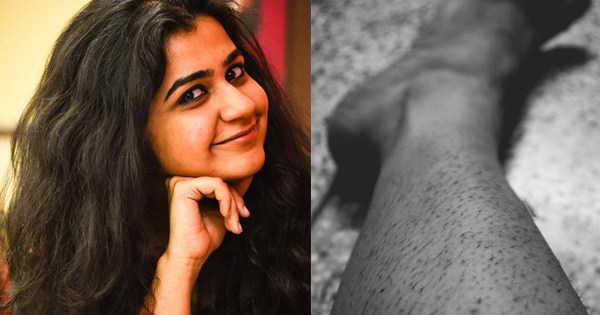 A 22-year-old woman's ode to women with hairy legs has gone viral on social media, with women all over the world praising her for refusing to feel ashamed of her body hair. Read on for the full story!

A 22-year-old woman is using her legs to make a point about the way we view female body hair in society.

It’s no secret that both men and women have hair all over their bodies. So why is it that women are expected to shave their legs, while men get sit back and relax?

Well, Naina Kataria is sick of being made to feel “gross” every time she doesn’t shave, and she’s using her legs to take a stand against men who think there’s something wrong with hairy women.

In an eye-opening poem, Naina, a writer, slammed the stigma against female body hair:

When a man tells me

I don’t believe him.

Instead, I relive my days in high school

When no matter how good I was

I was always the girl with a moustache

to grow up in your maternal family

Where your body is the only one that

Proudly boasts of your father’s X

While your mother’s X sits back and pities

He doesn’t know the teenager

Who filled her corners with

Being loved for who she was- someday.

He doesn’t know of the world that

tells you to ‘be yourself’

and sells you a fair and lovely shade card

in the same fucking breath

He doesn’t know of the hot wax and the laser

whose only purpose is to

with its own brand of womanhood

He doesn’t know of the veet and the bleach

That uproot your robust hair

in the name of hygiene

Hygiene, which when followed by men

makes them gay and unmanly

He doesn’t know how unruly eyebrows are tamed

and how uni brows die a silent death

All to preserve beauty

And of the torturous miracles that happen

Inside the doors marked

So when a man calls me beautiful

I throw at him, a smile; a smile that remained

After everything the strip pulled away

And I dare him

Till my hair grows back.

The stunning poem, which was posted on the Infinite Entropy Facebook page, has since been shared more than 10,000 times, with many women all over the world praising Naina for sticking up for hairy ladies everywhere.

While speaking with BuzzFeed, Naina revealed that the idea to write a body-positive poem came after an interesting date she had recently gone on.

I went out for a movie with a guy. We were watching this ad about razors for women when I remarked that celebrities shouldn’t endorse such products because it sends out a message that one HAS to buy them to look beautiful.

He replied by saying, “OMG you’re too much of a feminist.”